Who has more pressure on their shoulders? Conor or Khabib?

The question of the hour is who will come out on top between Khabib Nurmagomedov and Conor McGregor when they finally lock horns with each other and trade punches at UFC 229. People have been analysing different aspects of this fight, one of the most talked about point of discussion often is that who has more pressure on their shoulders, Khabib Nurmagomedov or Conor McGregor? Recently noted MMA journalist Ariel Helwani and former UFC veteran Chael Sonnen debated each other to try and answer the above question. 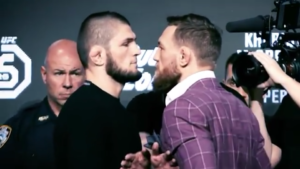 In the latest edition of ESPN’s Ariel and The Bad Guy, Helwani and Sonnen furiously debated each other. While Helwani sided with Conor, Sonnen on the other hand, felt Conor had more pressure and not Khabib. You can read a brief excerpt of their heated debate below:

Chael: I believe Conor has more pressure because he decided to go down for a street-fight by attacking the bus which ended in law-suits and people going to the hospital.

You can watch Ariel and Chael’s debate below: