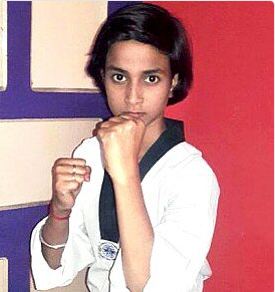 Martial Arts has transformed itself into a highly competitive spectator event from its traditional notions relating to street defense and warrior ethos. But its application has not quite limited itself to its competitive character. One such instance which reinstated the notion as to what it really means to be a martial artist how one should be rightly using their superpowers is when the 18 years old Taekwondo fighter, Priyanka Singha Roy’s valiantly fighting against three men who attempted to sexually assault her 3 months back.

Priyanka was walking to a shop at Kamarpara, in West Bengal with her younger sister when the three men with malicious intent and a common object attempted to assault them. But, they chose to mess with the wrong person and within no time the perpetrators of the attack succumbed to Priyanka’s technical retaliation.

She is #PriyankaSinghaRoy from Sainthia,Bengal. Was out on her cycle with her younger sister. 3 men accosted her. She beat them up with such ferocity that people had to rescue them! This 18 year old practices #TaeKwonDo & is a class 12 student.
RESPECT👏👏👏 pic.twitter.com/bNYVUN2Jda

Priyanka posses the sheer will to face and rise against any unpleasant trial this troublesome society has to offer. She developed these abilities with her martial arts practice. We at MMAINDIA.COM salutes her and hope that this article and her life story makes more women take up martial arts and benefit from it.

Previous articleUFC: James Vick says Justin Gaethje will get ‘outclassed’ by him
Next articleUFC: Miesha Tate believes Amanda Nunes could be the one to beat Cris Cyborg