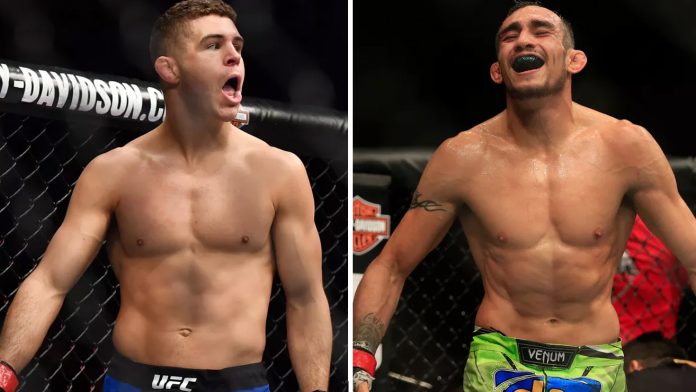 Ragin’ Al Iaquinta is never one to mince words, be it his opponents or the UFC itself. Earlier in the day, Iaquinta and Tony Ferguson got into a twitter scuffle. They had a lengthy back and forth and Iaquinta did not hold back when he was interviewed by SB Nation.

The animosity started days before UFC 223. Tony Ferguson was scheduled to fight Khabib Nurmagomedov for the UFC Undisputed Lightweight Champion, but had to withdraw from the event, after he tripped indoors over a cable during a UFC media event. Max Holloway was next scheduled to replace Ferguson, but he withdrew at the last minute due to weight-cut issues, and the title shot was passed around like a hot plate between the other light weight fighters on the card. Anthony Pettis, Michael Chiesa and Paul Felder emerged as favorites, but Ragin’ Al got the nod over them all. 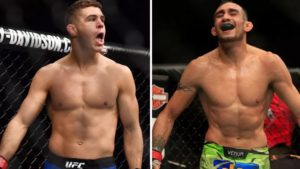 Ragin’ Al, who is also a licensed real estate agent back in New York, was mocked for his part time job and his ranking in the lightweight standings (10th currently) by Tony Ferguson. Ragin’ did not take the insult lightly and went straight for the throat, when he got word of it. This was what he had to say when interviewed on Submission Radio.

“Who is that guy to say anything? He had his title shot and he freaking blew it. He tripped on a wire…”

“That’s like…I don’t know, like Nature is weeding you out…you’re being weeded out.”

“Right now, I could beat the shit out of Tony Ferguson with my pinky finger. The guy can’t even walk. You can’t talk shit right now.”

“If I had to pull out of a title fight because I tripped over a wire, you’re not hearing me talk shit on twitter at all.”

“If it wasn’t for fighting he’d be like a worthless person. There’s no point to Tony Ferguson besides, honestly, really like, people beating his ass.”

“He gets dropped every fight and he’s out of his mind. No one likes personality, he’s a weird dude.”

“You tripped on a wire and I got the title shot, now you’re gonna come at me? I’ve fought with worse injuries than that, guaranteed, in my career. Don’t come after me cause I took advantage of a situation that he couldn’t capitalize on.”

“How many fights in a row has he won? 10 fights? And he still hasn’t fought for a title? There’s a reason for that. No one likes you. Go away.”

Ragin’ Al went straight for the jugular, that’s for sure. Here is the full interview by Submission Radio.

Here is their Twitter scuffle if anyone has missed it.

Tony Ferguson did not like to being called a ‘weirdo’ and fired back.

Damn Son You Didn’t Even Belong In That Cage, Although I WAS rooting For You, Weird Is Having To Make Your Own Name Plate At Media Day. Sad To See How You SOLD OUT To Fight For A Title When You Couldn’t Even Win The Title. Star Struck. Best Of Luck Kid. Get Back In Line.

I belonged more than you, you tripped on a rope

It’s Ok Kiddo, I Forgive You. I’m Not The One You’re** Really Angry At. One Day We Will See Each Other In The Octagon If You Keep Winning. #TUFGuys

Both of these fighters are TUF veterans, with Tony Ferguson winning TUF 13 and Ragin’ Al making it to the finals of the first TUF Live. This ‘beef’ has just got heated up, and could potentially set up a feisty future match up when Tony Ferguson returns from his long layoff.

UFC: Al Iaquinta opens up about his fight against Khabib Nurmagomedov at UFC 223

Previous article
UFC: Jeremy Stephens vs Jose Aldo set for UFC on Fox card in Calgary
Next article
MMA: Frank Mir believes Brock lesnar is a big draw but does not compare to Fedor Emelianenko as a fighter