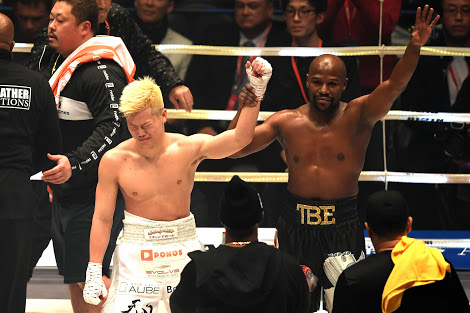 Floyd Mayweather took the MMA community by announcing his comeback to take on kickboxing sensation and technical prodigy Tenshin Nasukawa under the RIZIN banner in Saitama, Japan on December 31.

Mayweather has been out of action since around 16 months. Many thought the kickboxing sensation would be the one to break Mayweather’s undefeated streak. Keeping in mind the elite kickboxing background of Nasukawa, the bout was decided to be a strictly boxing exhibition with as short as three rounds.

However, multiple time boxing legend Mayweather didn’t even require one, as he dropped Nasukawa thrice in three minutes to win the fight via corner stoppage. A concussed Nasukawa had to be carried his way outside the ring. Due to the lopsided nature of the fight, the combat community heavily accused the fight to be scripted, however a former champ from the MMA community does not care.

Lot of people saying @FloydMayweather fight was fake, even if it was, what’s the problem? Guy made 9M in one minute for a exhibition match . Not bad, good for him.

Mayweather started relatively loosely. Nasukawa capitalized on the opportunity, to hit Mayweather with a decent shot. However Mayweather established his rhythm to hit Nasukawa with a short left hook which was enough to floor Nasukawa. Mayweather then dropped Nasukawa twice with a right hand before Nasukawa’s corner threw in the towel.

Previous articleT. J. Dillashaw and Henry Cejudo go back and forth on ESPN ahead of super fight
Next articleUFC: Megan Anderson on why UFC should build up the women’s FW division: Cyborg is gone!