RDA vs Michael Chiesa agreed for UFC Fight Night Raleigh; fighters with each other the best on social media

In an exciting welterweight match-up, Rafael Dos Anjos will take on Michael Chiesa at the UFC Fight Night 166 which will take place at the PNC Arena in Raleigh, North Carolina.

This will be the first-ever event to ever take place in Raleigh. 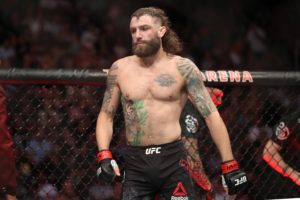 Dos Anjos is coming off of a unanimous decision loss to Leon Edwards at UFC on ESPN 4 in July. Before that, he defeated Kevin Lee via submission. This will be an important fight for RDA who has lost three of his last four fights.

Michael Chiesa is high on spirits as he is currently riding on an impressive two-fight winning streak. He defeated Diego Sanchez in his last fight and before that he submitted Carlos Condit at UFC 232. Chiesa moved up to welterweight after losing two back to back fights to Kevin Lee and Anthony Pettis.

RDA even wished Chiesa about having a good training camp.

It didn’t take long for Chiesa to reply:

You have a great camp as well @RdosAnjosMMA. Nothing but respect for you and your team. See you in January! Oss 🤘🏼 https://t.co/Kq2Ptf3czn

“You have a great camp as well @RdosAnjosMMA. Nothing but respect for you and your team. See you in January! Oss,” Chiesa wrote.

A heavyweight fight between Junior dos Santos (21-6) and Curtis Blaydes (12-2) is scheduled to headline UFC Fight Night on Jan. 25.