Read the Twitter gunfire between Jon Jones and Israel Adesanya! 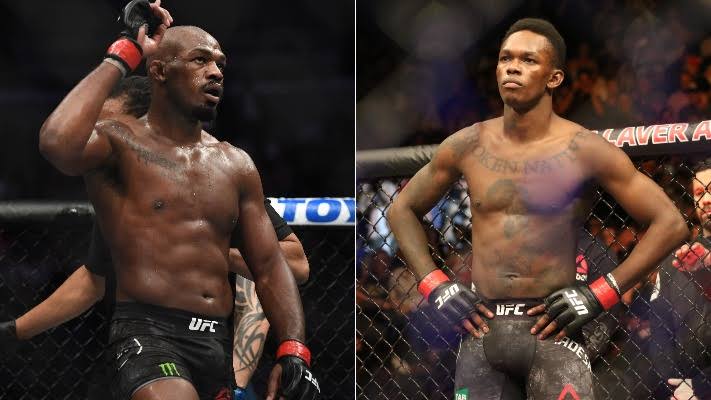 The MMA world may have been on a stand still, however the two champs are going at each other. Light heavyweight king Jon Jones and middleweight champ Israel Adesanya aren’t holding back.

The duo are considered to be potential future opponents. They have been going back and forth on social media lately. It all started when Jones recently got arrested due to DUI (drinking under influence). He reportedly also fired a gun and was arrested in his home town of Albuquerque. 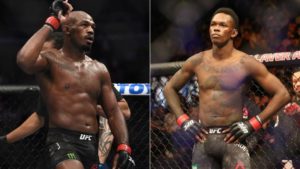 Adesanya however added flame to fire by randomly pocking Jones. (via Twitter):

Hey pussy you still there… @JonnyBones

Despite battling tough times, Jones wasn’t going to keep quiet. He took to Twitter with an infamous picture of Adesanya getting knocked out in a kick boxing bout. The doctor can be seen providing Adesanya some oxygen. Though Jones deleted the tweet. (via Twitter): 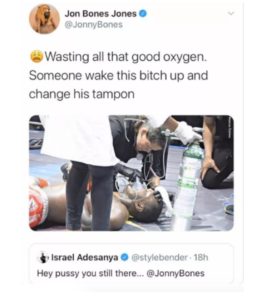 “Wasting all that good oxygen,” Jones wrote in his deleted Tweet, using a picture of Adesanya receiving oxygen after his loss. “Someone wake this b**ch up and change his tampon”.

A disappointed Jones then posted another tweet that it’s ‘sad’ that people claim one cannot bounce back after facing adversity. He deleted this tweet as well. (via Twitter): 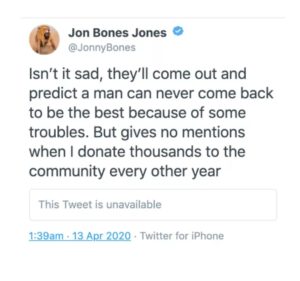 Adesanya backfired claiming he learns from his mistakes. He claims he hasn’t been knocked out since unlike Jones who has been arrested multiple times since 2012. (via Twitter):

Ever since Adesanya made his debut, similarities have been drawn between him and Jones. Adesanya’s lanky body type and high IQ particularly in the striking department does resemble Jones. When Adesanya won the title, the MMA community couldn’t resist associating the two.

Adesanya though being keen to the challenge, he wants to clear the middleweight division first. Jones’ wrestling and BJJ being superior on paper, Adesanya wants to his build his way up. Another problem being Adesanya being too small for light heavyweight. According to him, the heaviest he has been was 203 pounds. However he believes his kickboxing arsenal will nullify the size disadvantage.

Previous articleUFC News: Israel Adesanya turns the tables on Jon Jones; uses his own phrase to needle the LHW champ
Next articleUFC News: Read which UFC Heavyweight contender claims he ‘probably’ had Coronavirus