Last year has been an eventful milestone for REBEL Fighting Championship (REBEL FC). Headquartered in Singapore, it hosted two successful events in the glitzy Tier One cities of China, Shanghai and Shenzhen, for the first time in its young history. REBEL FC 5 – BATTLE ROYALE: QUEST FOR GLORY (胜者为王) on 12 August 2017 at the posh Kerry Hotel in the upscale district of Pudong, Shanghai and REBEL FC 6 – CHINA VS THE WORLD (挑战全球) at Shenzhen Stadium continued REBEL FC’s signature, hard hitting competitive matches of grooming local Chinese talent complemented by a talented bevy of heavies from the international arena.

This year, REBEL FC is not letting up in its relentless drive to mould Chinese champions as well as launching international stars into superstardom. Titled REBEL FC 7 – FIGHT FOR HONOUR (荣誉之战), it boasts four main bouts parading an even mix of Chinese athletes and global fighters on Sunday, 29 April 2018. REBEL FC 7 – FIGHT FOR HONOUR will be returning to the luxurious Kerry Hotel for a touch of elegance and opulent spectacle as our athletes duke it out to attain the highest honour one can achieve – triumphing in front of thousands and to be remembered for a lifetime.   The four main bouts are as follow: 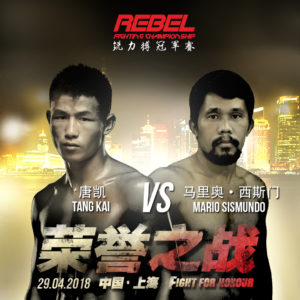 One of China’s hottest rising stars, Tang Kai began training in wrestling at the age of 13 in 2009 and graduated with wrestling as his major from the sports university in 2015. In that year, he made the switch to training and competing in MMA.

Tang Kai idolises the Brazilian MMA great, Anderson Silva and works hard to be like Silva, equally competent in every martial art style he picks up. While his core discipline is wrestling, Tang Kai loves to use a lot of striking techniques, especially boxing, to defeat his opponent. He trains 6 hours a day, six days every week. He defeated Filipino SAFC Champion Mark Valerio with a powerful head kick in REBEL FC 6: China VS The World in Shenzhen on 2 September, 2017.

Only a privileged few trained with the great Manny Pacquiao and Mario Sismundo is one of them. For a period of time in his career as a combat athlete, Sismundo trained in boxing with Pacquiao before he transitioned to MMA in 2008.

Although his foundation lies in boxing, Sismundo is proficient on the ground and used the Kimura on more than one occasion to submit his opponents. He has also added kickboxing to his repertoire after he moved from competing in boxing to competing in MMA. 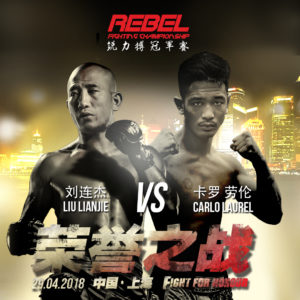 Since he was young, Liu has been physically inclined. As he entered adulthood, he wanted to join a gym but found its membership fees too pricey for his taste. Later, he stumbled into an MMA gym that allowed its students to train for free. It was then Liu developed a liking for MMA and started intensive training in the sport.

Liu has a diverse set of academic and life skills.  He graduated with a degree in English and worked as an internet café manager as well as a translator before he turned to professional fighting. When Liu is not competing in MMA tournaments, he is an MMA instructor in gyms based in Beijing, China and Thailand. Liu trains religiously every day of the week with an emphasis of perfecting each of the martial art disciplines he has learnt. Liu prefers a stand-up game and his favourite technique is to go for the kill with strong head and body kicks.

Laurel started training in Brazilian Jiu-jitsu (BJJ) and after he attained his purple belt in BJJ, decided to mix it up with other fighting disciplines and moved to participating in professional MMA competitions a few years ago. He was also a personal trainer before he went into fulltime MMA training.

A confident man with a sense of wicked humour, he often tells others he has a PhD because he likes getting under people’s skins and riling them up, but only in the fighting cage so that his opponents will be motivated to attack him and make the match more entertaining for spectators compared to a rival who is constantly playing a defensive game. With his specialty in BJJ, Laurel looks for a break in his rival’s concentration and goes for the takedown once the latter is not paying attention, exhausted or transit from one fighting style or another before executing a submission for the win.

Laurel’s opponent Liu Lianjie prefers a stand-up fight, making their fight a clash of styles that will make for an intriguing and tense viewing for the audience. 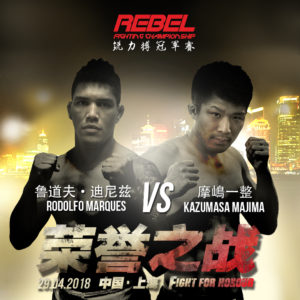 Rodolfo Marques Diniz is powerfully built. With a base in wrestling, he revels in a good back suplex before slamming his opponent onto the ground. On top of that, he is skilled in BJJ, boxing and Muay Thai. If he isn’t laying the smackdown on his fellow challengers, he will be giving them a flurry of punch combos before ending it with a spinning back kick or submitting them with a flying armbar.

Rodolfo is REBEL FC’s Featherweight Champion after defeating Nagakura Tatsunao of Japan in REBEL FC 5: Quest for Glory when the latter was disqualified for an illegal soccer kick on Rodolfo.

Kazumasa picked up MMA seven years ago when he was looking for a gym that can help him get in shape and keep him fit. MMA not only gave him what he was looking for, but a sense of personal satisfaction when he learned new fighting moves or defeated an opponent in a match. He takes inspiration from his gym instructor at Mori Dojo, Akihiko Mori, a famous DEEP – a Japanese MMA promotion – veteran. Kazumasa also teaches at Mori Dojo when he is not competing. Before Kazumasa took up MMA, he was a technician doing maintenance work in a factory.

Kazumasa sees this opportunity against reigning REBEL FC featherweight champion Rodolfo as a breakthrough experience in his professional career as it will be his first title fight and he is looking forward to not only make a name for himself in REBEL 7 – FIGHT FOR HONOUR but to better himself as a combat athlete.  He trains five days a week in grappling, kickboxing, BJJ and strength conditioning. Kazumasa sees himself as equally competent in finishing off his opponent either on the ground or standing up. He likes to use the hook for the knockout and the rear naked choke for the submission. 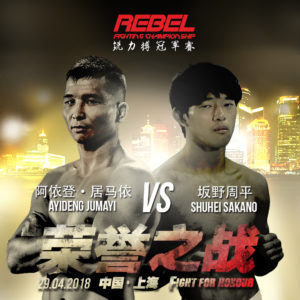 Ayideng credits MMA with bringing him to the right path. He got into fights many times when he was school and these constant clashes nearly led him astray. Determined to make a living the right way, he enrolled in Urumqi sports school in Xinjiang, the place of his birth. There, he developed into a lethal professional MMA practitioner and has since made a stable career out of the sport, which also enabled him to support his family.

Although ranked No.1 in the bantamweight and featherweight categories in China, REBEL FC 6: China VS The World on 2 September 2017 saw Ayideng win his first title in his professional MMA career, beating Chris Morris of Australia via an unanimous decision after five tough rounds in their Bantamweight title fight. While his base is primarily boxing with the overhand right as the preferred technique, he can pull off a killer rear naked choke if the game ever goes to ground.

Shuhei started training in MMA during the first year of his high school. He liked watching K-1 and DREAM and these fighting shows inspired him to join an MMA gym where he started training. Shuhei’s favourite MMA role model is former Japanese DEEP Bantamweight champion, DJ. Taiki.

In the upcoming REBEL FC 7 on 29 April 2018, Shuhei will be given a title shot where he will take on reigning REBEL FC Bantamweight champion, Ayideng Jumayi of China. It will be Sakano’s first title fight in his professional career and against the no.1 ranked Bantamweight in China and reigning REBEL FC Bantamweight champion, Ayideng Jumayi, and he will be going in with an aggressive gameplan by attacking. To him, attack is the best offense even against seasoned veterans. Sakano prefers to submit his rivals with the brabo choke (ninja choke) or knock them out cold with a spinning backhand blow.

Sakano previously defeated Wang Daoyuan of China in REBEL FC 6: China VS The World. Shuhei is currently in his senior year of studying International Relations and will graduate in March 2018 and presently works as a part-time cashier in a supermarket when he is not training or studying.

Aside from our four main bouts, there will be also six more international quality bouts on 29 April 2018. They can be seen below in the full fight card.

- Advertisement -
Previous articleUFC: Vitor Belfort retiring after UFC 224 but might make a comeback some day
Next articleWWE: Bayley will not turn heel in recent future