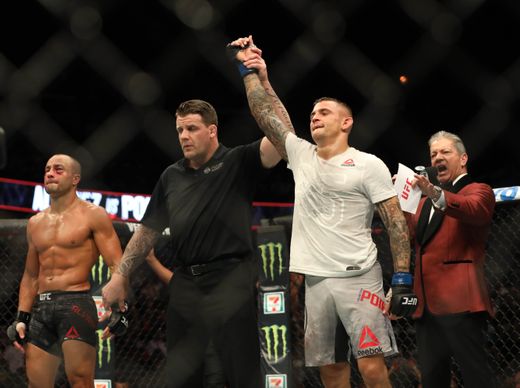 Dustin Poirier (24-5 MMA, 16-4 UFC)was scheduled to face Nate Diaz on UFC 230 on November 3 at Madison Square Garden. Unfortunately, the American Top Team fighter suffered a hip injury because of which the bout has been pulled off from the UFC 230 card.

Poirier has been super successful in his lightweight venture since moving on from featherweight and has a put up 6 victories,1 loss, and 1 NC. In his run, he has beaten two former champions(Anthony Pettis and Eddie Alvarez), a veteran like Jim Miller and a hardcore brawler like Justin Gaethje.

Here we relive Poirier’s decisive TKO victory against ‘The Underground King’ Eddie Alvarez(29-6 MMA, 4-3 UFC) in a rematch on July 28, 2018, in the main event at UFC on Fox 30. Poirier earned a Performance of the Night award with his dominating performance against the former champion.

The main event in Calgary featured an anticipated rematch between Eddie Alvarez and Dustin Poirier. In their first fight at UFC 211, Alvarez landed two illegal knees while Poirier was against the fence. With the Texas commission not operating under the new unified rules, referee Herb Dean declared the fight a No Contest as he did not believe Alvarez knew Poirier was a grounded opponent at the time.

Alvarez started with heavy kicks and controlled the center of the octagon. He started throwing combinations, but Poirier’s defense was well intact. Alvarez threw a combo to the body and backed Poirier up. Poirier landed a left hand, then backed out and worked his jab. Alvarez landed a heavy kick to the body, but Poirier worked through it, then closed the distance.

With time left on the 1st round, Alvarez dropped for a takedown, but Poirier defended it and landed a body kick in response. They traded punches in tight not long after, but Alvarez got the better of it. Alvarez landed solidly down the stretch in a conservative first round, yet one heavy on activity.

Poirier tried to secure a jump guard guillotine choke in the second, but Alvarez defended it and Poirier had to give up position to Alvarez on the ground. But they got back to their feet, and two minutes in Alvarez landed his takedown. Alvarez took Poirier’s back and got a neck crank that had blood squeezing out of Poirier’s nose. The choke wasn’t there, but the crank was uncomfortable while it lasted.

With Alvarez mounted and Poirier’s back on the fence, Alvarez landed a pair of 12-6 elbows and referee Marc Goddard stopped the fight to warn Alvarez and take his dominant position away. On the restart, Poirier went absolutely ballistic.

It started with a left hand. And a knee to the body came after it. Poirier recognized Alvarez was hurt, and he poured it on. Punch after punch, elbows, kicks, knees – Alvarez wouldn’t go down. But then he finally did, and Goddard stepped in to shut it down.

Winner: Poirier via 2nd round TKO.