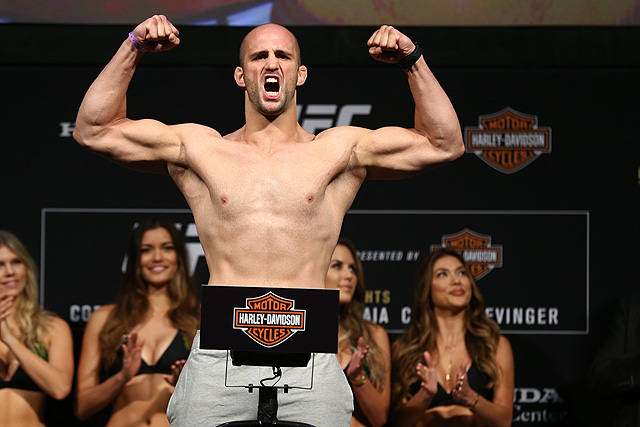 Volkan Oezdemir who recently shot to popularity with his impressive back to back performances, has fallen into the hands of the law on account of battery charges. It has been noted that the rising UFC prospect had been arrested on Saturday for aggravated battery assault which usually involves physical harm or disability to the victim. He was taken into custody in Fort Lauderdale in Florida and is held in Broward County jail.

The full details pertaining to the event has not yet been revealed and it is yet to be determined if he is found guilty. But as per the Florida’ statue, an aggravated battery is committed when a person is aware of the crimes and is done with intention to maim the victim.

The 28-year old fighter is on a three fight win streak inside the Octagon and is already considered to be a title contender. His recent fight with top light-heavyweight Jimi Manuwa earned him a ‘Performance of the Night’ bonus after he decimated his opponent in only 42 seconds of the very first round.

The UFC Light-heavyweight champion Daniel Cormier is running short of opponent to face and the Swiss fighter seemed to be the next big challenge for DC. Cormier had stated few weeks back that he was close to signing a fight with the Swiss contender and the duo would duel in the beginning of 2018.

But now that Oezdemir has found himself behind bar, it appears that his possible shot at the UFC strap could be slipping out of his hands.

Volkan Oezdemir appeared in a Ft. Lauderdale, Florida courtroom Sunday morning in response to allegations from an incident in a Ft. Lauderdale bar on August 12, 2017. Mr. Oezdemir was accompanied by his attorney Bruce A. Zimet. Following a brief hearing (before) a Broward County Circuit judge, Mr. Oezdemir was granted a $10,000 bond during the pendency of his case. Mr. Zimet, a former federal prosecutor, described the incident that formed the basis of the case as nothing more than a bar room altercation in which Mr. Oezdemir, who was not the aggressor, was totally justified in all of his actions pursuant to Florida law. Mr. Oezdemir expressed his faith in the America judicial system and looks forward to all of the facts involved in the August 12, 2017 incident being made public. Mr. Oezdemir has full confidence that when the full picture is presented that he will be totally vindicated.”