India’s ONE Championship contender, Ritu Phogat has called out fellow atomweight fighter Bi Nguyen who defeated Ritu in a controversial decision at ONE Championship: Dangal on 15 May 2021 for a spot in the 2021 ONE Women’s Atomweight Grand Prix. Ritu started her MMA journey spectacularly as she rallied wins in the ONE FC promotion. She dominated all her opponents using her elite wrestling skills which she got from her renowned wrestling family. She went walked through all her opponents with ease and showcased her amazing wrestling techniques and sheer brute strength.

In her MMA debut at ONE FC, she fought Nam Hee Kim at ONE Championship: Age Of Dragons in November 2019 and won the fight in the first round via TKO. She then went on the secure three more dominant victories in the ONE FC. She defeated Wu Chiao Chen, Nou Srey Pov, and Jomary Torres. Ritu was then scheduled to fight Meng Bo in a quarterfinal match of the ONE FC’s Women’s Atomweight Grand Prix at ONE Championship: Empower on 28 May 2021, however, the fight got scrapped and she fought Bi Nguyen at ONE Championship: Dangal on 15 May 2021 for a spot in the 2021 ONE Women’s Atomweight Grand Prix. Ritu Phogat’s fights have been extremely popular in India and the fans here can wager on her fights at Mostbet app. 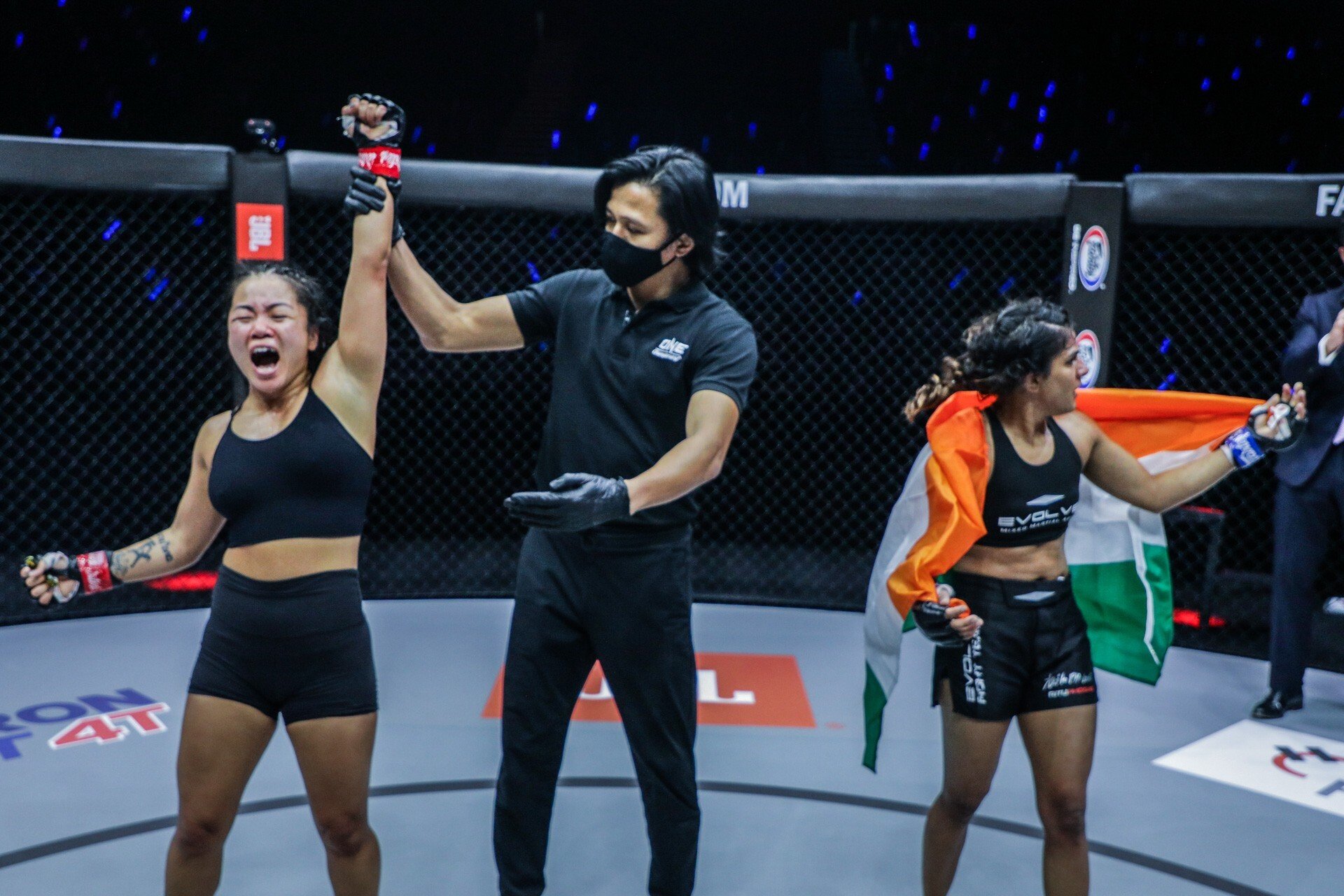 The fight was a back and forth battle on the feet and as well as on the ground, but it was Ritu Phogat who dictated the pace of the fight and was ahead of her opponent till the very end of the fight. The decision of the fight surprised everyone as the judges gave the fight to Bi Nguyen. The decision was very controversial and Ritu Phogat immediately protested it. After facing the loss, Ritu had to drop off from the Women’s Atomweight Grand Prix.

After facing her first defeat in her MMA career, Ritu jumped back onto the winning track with a dominant win over Lin Heqin at ONE Championship: Battleground. She then got added back to the Grand Prix after showcasing a dominant performance over Lin Heqin.

Ritu is now coming off a spectacular win over Meng Bo in a quarterfinal bout of the Atomweight World Grand-Prix at ONE Championship: Empower.

“Yes! Yes! Yes!. I want that rematch. That’s my wish. I definitely want to rematch her in the future. I’m going to request the ONE FC officials to get me that rematch fight with Bi Nguyen after the Grand-Prix is over. I want to fight her again. That’s my open challenge to her.”Ritu Phogat said.

Would you guys love to see Ritu Phogat rematch Bi Nguyen in the future?