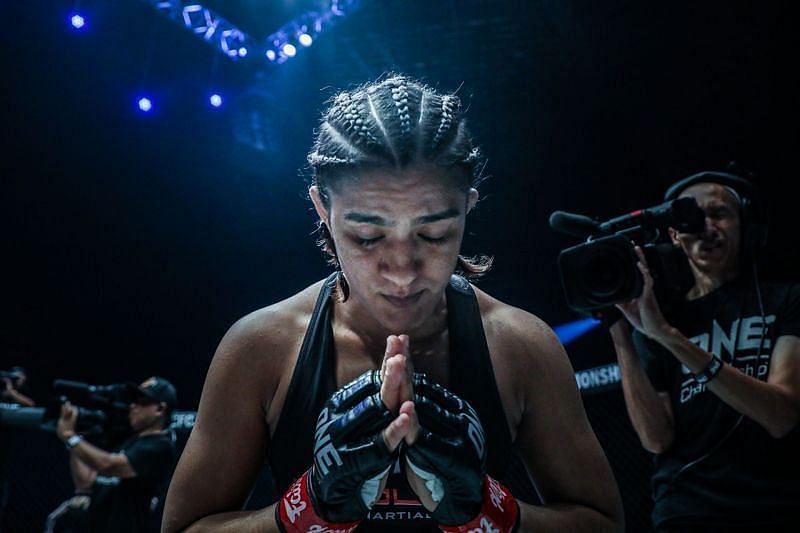 Indian mixed martial arts superstar Ritu Phogat (5–1) fortified her reign at ONE Championship with a staggering unanimous decision victory over Lin Hequin (14-3-1) of China at ONE: Battleground on Friday.

Ritu’s atomweight 52kg bout against Heqin, touted to be the toughest fight of her career, came on the heels of the Haryanvi fighter’s sole career loss against Bi Nguyen at ONE Championship: Dangal which took place on 15th May.

The defeat against Nguyen from Vietnam was considered to be an upset by many as Ritu sustained a loss via a close split decision, and during the buildup to Battleground, she determined a remarkable comeback.

Now, up against the Chinese MMA fighter who was on an eleven fight win streak, Phogat displayed an immense ground game, overpowering Heqin through the three round fight which took place at the Singapore Indoor Stadium in Kallang.

The 27-year-old landed many takedowns in the fight and dominated Heqin with her clinical ground and pound game. After the fight, all three judges favoured ‘The Indian Tigress’, marking the second unanimous decision win for Ritu’s professional MMA career.

While she has redeemed herself with the superb performance over Heqin, Ritu had already expressed her desire to lock horns against Bi Nguyen in a rematch to avenge her split decision defeat back in May.

Moreover, prior to ONE: Battleground, Ritu revealed that she still doesn’t believe it was a defeat for her, even though she acknowledged the decision from the judgement panel.

“I personally don’t think the fight was close. As far as I know, the fighter who dominates the fight wins it. I respect the judge’s decision but I think I won the match,” Ritu said in an interview with Hindustan Times.

I would like to have a rematch with Bi Nguyen and I won’t let that fight to be close. However, I am focussing on my next fight with Lin Heqin for now,” she added.

Do you think Ritu Phogat will aim for a rematch with Nguyen now, on the heels of her win against Lin Heqin? Let us know in the comments.