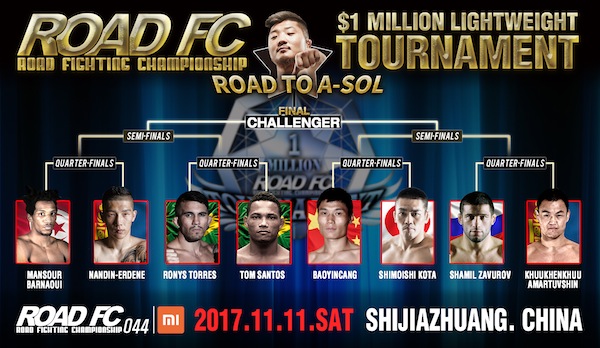 September 6, 2017 – ROAD Fighting Championship announces a renumbering for the next two events, with one date change.

Xiaomi ROAD FC 044 (formerly 043), which was previously announced for October 21 in Shijiazuang, Hebei, China​, will now take place on November 11. The change of date is due to the preeminent upcoming 19th National Congress Council of the Communist Party of China which will be held for a week starting on October 18. At this event, the quarterfinals round of the historic $1 Million Lightweight Tournament will be held. 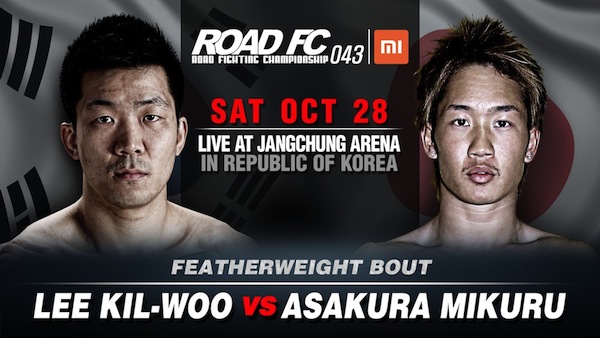 As previously announced, this event will be headlined by the ROAD FC Interim Middleweight Championship between top contenders and Korean MMA originals Choi Young and Kim Hoon.

Lee Kil-Woo (4-6, Ssabi MMA) had a tough career start against veterans like Shintaro Ishiwatari and Makoto Kamaya. In 2013 he turned it around when he won the ROAD FC Bantamweight Tournament, defeating future ROAD FC Flyweight Champion Song Min-Jong to become the Champion of the division. Injury and surgery set him back a year and a half to finally make his first title defense. Lee Yun-Jun was rocketing in his career and knocked out Kil-Woo in the first round to become the new Bantamweight Champion.

After almost two and a half years away from the cage to focus on building his gym and students, Lee Kil-Woo has decided it’s finally time to make his comeback.

Asakura Mikuru (5-0, RINGS/Triforce Asakasa) returns to ROAD FC after defeating Muay Thai champion Oh Doo-Seok in March of this year. He racked up an impressive 7-1 amateur record in The Outsider, then made his pro debut and claimed both the Featherweight and Lightweight titles in the promotion. The karateka and his brother Kai are quickly becoming two of the hottest prospects from Japan.

On November 11, ROAD FC returns to China under the auspices of the host city Shijiazhuang. At Xiaomi ROAD FC 044, the quarterfinals round of the $1 Million Lightweight Tournament will take place. Over 40 fighters participated in international trials around the world which was eventually whittled down to 16 for the opening round at ROAD FC 036. Stunning upsets and incredible knockouts were the theme of the night in the historical event.

The winners participated in a blind draw for their next opponents. The four quarterfinals matches are as follows: Mansour Barnaoui (Tunisa/France) vs Nandin-Erdene (Mongolia), Ronys Torres (Brazil) vs Tom Santos (Brazil); Baoyincang (China) vs Shimoishi Kota (Japan); and Shamil Zavurov (Russia) vs Khuukhenkhuu Amartuvshin (Mongolia).

The next event will be Xiaomi ROAD FC 042, held on September 23 at the Chungju World Martial Arts Festival sponsored by UNESCO. In the main event, Aorigele versus Masuda Yusuke pits power versus experience, and when these giants clash, expect fireworks. A Pride-era throwback is set between two legends of the sports: Minowa Man vs Yoon Dong-Sik. For more information about the Chungju World Martial Arts Festival, please visit the Official Website (http://www.martialarts.or.kr/index_eng.php).

Previous articleRonda Rousey in a WWE storyline. Could this be her new career?
Next articleUFC 215 Embedded: Vlog Series – Episode 1