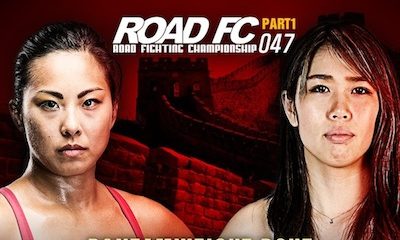 A women’s bantamweight match has been added, Ramona Pascual versus Marina Kumagai.

Ramona Pascual (3-2, Phuket Top Team) of Hong Kong, China began her combat career in kickboxing, then took up grappling, and it led to MMA. After losing back to back fights, she made a huge change by going to train in Korea. There she won a chance to be a contestant on “Fearless Guys”, a reality MMA television show, which led to Pascual signing with ROAD FC. She made her fight camp in Korea for her promotional debut on ROAD FC 45 XX, and made a huge impression with a dominant victory.

Marina Kumagai (debut, Weerasakreck Fairtex Muaythai) of Sapporo, Japan has a strong base in Muay Thai. She trains with Japan’s most authentic Muay Thai team, founded in Japan over 20 years ago by Wongpasser Weerasakreck and coached by all Muay Thai champions from Thailand. Kumagai competed in Japan’s J-Network and M-One, amassing a professional record of 4-4 in Muay Thai and kick boxing. At 174cm tall, her strength is her reach and ability to distance.

Pascual versus Kumagai is a match to broaden the bantamweight division for women in Asia, and these two fighters who have big kicks and powerful clinch work will be an excellent showcase.

Eight lightweight fighters are featured on Part 1, with many who were previous competitors in the ROAD FC $1 Million Lightweight Tournament. Sanda champ Baoyincang’s kicks and tenacity versus Muay Thai champ Rafael Fiziev’s striking and strategy will be an explosive mix. Sasaki Shinji versus Albert Cheng sees two BJJ black belts with massive MMA experience return to the cage in a revenge match that will definitely amp up the aggression. Intelligent striker and ROAD FC mainstay Ki Won-Bin faces multiple Muay Thai champion “Saksurin” Khaorat in a highly unpredictable match. Chinese MMA OG Baoshe Riguleng’s return to MMA is highly anticipated, but he’ll have to get past gatekeeper Bruno Miranda first, and that’s a huge bang of a welcome back.