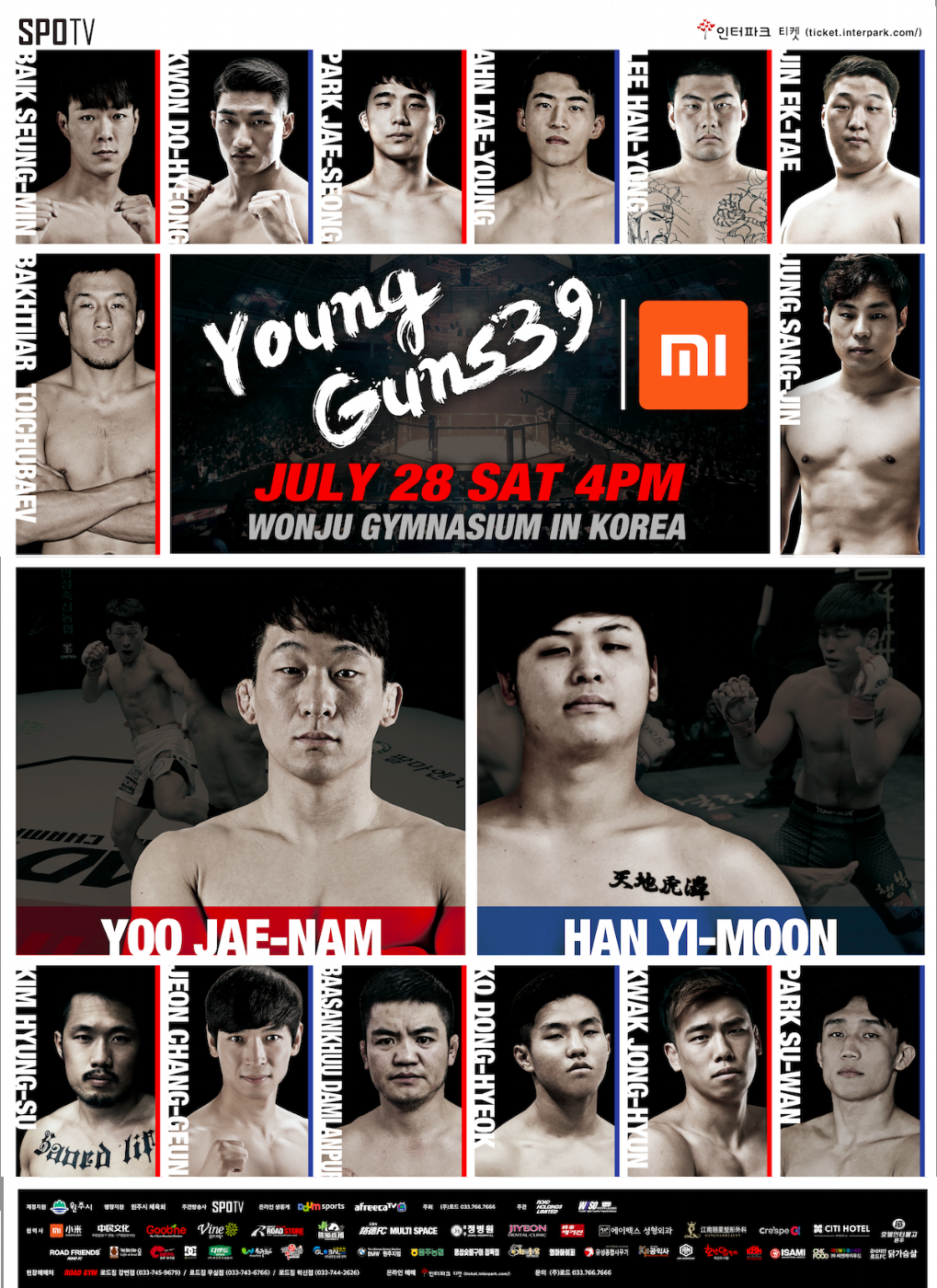 Yoo Jae-Nam (5-7, ROAD Gym Wonju) is the long-time training partner of former ROAD FC Champion Kim Soo-Chul. During his career he’s faced bright times as a hot prospect, and stumbling stress with a string of losses, but always delivered exciting performances. Yoo recently broke his spate of bad luck with a first round choke submission victory over Tatsuhito Satsuma.

Han Yi-Moon (4-3-1, Team Finish) entered the TV show “Crying Fist” as a teenager and became an instant standout by showing off his aggression and strong skills. He went through a 4-year professional MMA career and then stopped to complete his military service. Han’s last match saw him draw with Yuan Ye in a thriller, and fans will remember this well when he returns to the cage for the first time in over two and a half years.

Yoo Jae-Nam versus Han Yi-Moon is a battle between two well-known Korean fighters who have complete skill sets – will Yoo continue his climb or will Han make a brilliant return?

Kim (3-1-1, Kim Daehwan MMA) is a well-known wrestler who overcame a rare blood cancer and used his platform to champion children suffering similar diseases. He bravely challenged Kron Gracie in the pair’s debut MMA performance, and went on to go 3-1-1 with a recent TKO over much more experienced Sano in The Outsider Tournament Finals.

Jeon (1-0, BNM Multi Gym) announced his presence on “Fearless Guys” by calling himself a “Fighting Genius”. He then proceeded to back up his claim with dominance in the drills and skill tests, rising through the sparring and matches to win the whole competition. Jeon’s first pro appearance in ROAD FC is highly anticipated since the season’s end.

Baasnkhuu (4-1-1, Team Tungaa) has made a name for himself beating some highly ranked Mongolian and Chinese fighters. His debut with Yuta Nezu was a hard-fought draw which shook off the ring rust from almost 2 years away from the cage.

Ko (0-4, Team Strong Wolf) is a 21-year old rookie who carved a long amateur career in the ROAD leagues before going pro. Although he has yet to earn a win on his record, Ko is gunning for as much experience as possible which included his first pro fight against none other than DEEP champ Yuki Motoya.

Bakhtiyar (10-4, Jash Kuch) is a Kyrgyzstan prospect who’s trying to make a name for himself on the international fight scene. He has good knockout power and endurance which makes him a threat to anyone. Jeong (1-0, Team Poma) has come to MMA later than most, but has shown impressive performances in his amateur fights, and won by armbar in his pro debut. He’s expected to show much more striking potential in what will be abig step up in levels this fight.

Baek (1-2, Korean Zombie MMA) and Gwun (0-2, Gumi MMA) are two rookies who show the ferocious Korean style, and will make an exciting fight for the fans. They both need the win to work their way into the rankings.

The show gets started with an openweight bout between two young rookies out to make a name for themselves!