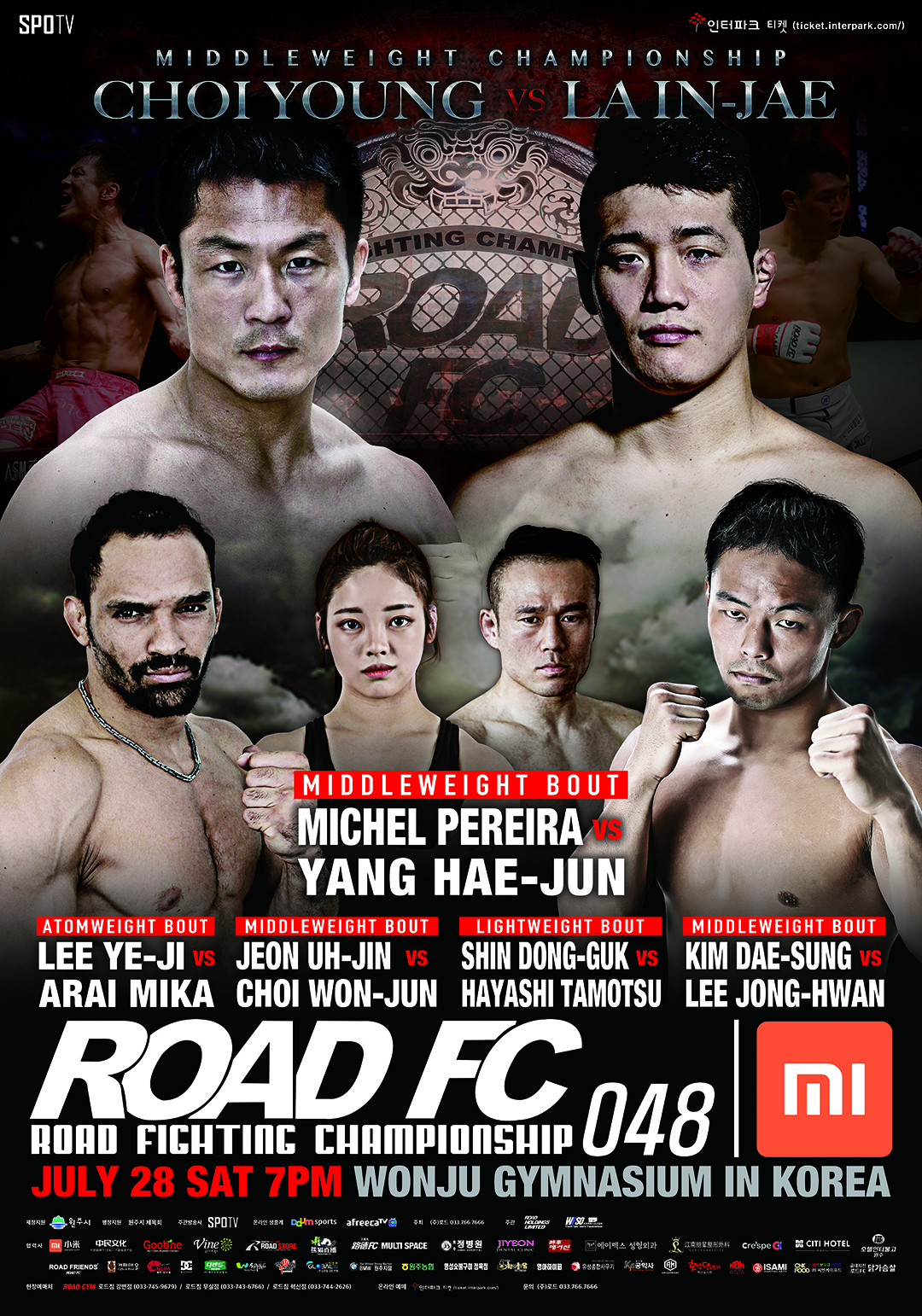 “RYO” Choi Young (20-11-3, Shinbukan/Land’s End) is also the DEEP Middleweight Champion who also fought in K-1 and Spirit MC. He returned to Korea after 10 years, challenged for the title, and then earned the Interim Championship by defeating both former champion Riki Fukuda and Kim Hoon.

La In-Jae (7-0-1, Team Korea) was promoted to the challenger’s spot. He is a dominant wrestler with powerful striking who has worn down opponent after opponent, going undefeated. His only draw was a brutal battle with Dong Xin that had the crowd gasping with every punch. Since then, La has earned decisions over Cha In-Ho and Lim Dong-Hwan and shown that he can dismantle whatever game plan is brought to him with grinding precision.

The future of the middleweight division depends upon the outcome of this fight – the hardened Champion Choi Young or the promising La In-Jae.

Michel Pereira (19-8-0-1, Demolidor Team) is a decorated veteran from Brazil who has started to gain international acclaim for his exciting style and jiu jitsu ability. At just 24 years old, he’s already ranked second by Tapology in Brazil welterweights, and first in the European Balkans area.

Yan Hae-Jun (11-5, Team Posse) from Spirit MC and Neofight, to international acclaim at Legend FC, Yang has been the powerful, threatening knockout artist with an increasing cache of weapons in his arsenal. His return after a 2-year hiatus is highly anticipated.

Pereira versus Yang will be an explosive battle between to very experienced grapplers who can also land a TKO, so don’t blink.

Lee Ye-Ji (3-3, Team J) of Korea started her MMA career at 16 and now faces her first fight as a university student. She experienced 6 matches in 3 countries against the stiffest of competition, including massive veterans Hisae Watanabe and Satoko Shinashi, a loss which she avenged. Lee narrowly lost a split decision Tomo Maesawa in her most recent outing, which showed her exactly what she needs to work on. But an injury kept her out of a return with Miki Araki, so she makes her awaited return no longer as “The High School Fighter”.

Arai Mika (3-0, Miburo) of Japan started MMA in the amateur Shooto leagues, which gave her the foundation for a promising pro career. She debuted one year ago in ROAD FC 039 by decisioning the tough Hong Yoon-Ha. Arai showed her natural strength in DEEP Jewels by knocking out Furuse Mizuki, then winning a decision against the much more experienced Pan Hui. Arai is a closely watched rookie in women’s MMA this year.

This women’s atomweight match between Lee Ye-Ji and Arai Miki will showcase the skills of two very promising and increasingly well-rounded MMA prospects.

Jeon Uh-Jin (3-3, Monster House) started in MMA as a tough as nails prodigy who quickly rose to the top of the middleweight division with impressive performances. He eared a shot at former ROAD FC Middleweight Champion Riki Fukuda in Japan, but his early title opportunity was ended by KO. Undeterred, Jeon took his military leave so he could refocus. Fans will expect to see his impressive striking and grappling back in action.

Choi Won-Jun (2-2, Geusan Dojang) fills in for La In-Jae, who was bumped to the main event slot title challenge. Choi was undefeated amateur, and turned pro just 2 years ago. Both of his wins are by TKO, and although he has submission skills, he hasn’t met the right opponent to show them off yet.

This middleweight match between homegrown fighters Jeon Uh-Jin and Choi Won-Jun deepens the pool of the division, and will be a clash of two exciting young fighters..

Shin Dong-Guk (2-0, ROAD Gym Wonju) is a firefighter by profession who came to the sport of MMA while looking to expand on his conditioning. He turned out to be a natural, getting attention from his emotional walkouts in full firefighter gear to his hot performances inside the cage. Transitioning from a start in the ROAD FC amateur leagues, Shin now rides a 2-0 professional record with two first-round KO finishes.

Hayashi Tamotsu (6-4, Honey Trap) is an MMA striker and kickboxer who has competed for the past five years in DEEP, Grachan, Pancrase, and Krush. He has a lot of experience over Shin, and fights southpaw, so he’s going to be a big step up for the fireman in his own home ground.

Shin Dong-Guk versus Hayashi Tamotsu pits two strikers against each other, and it’s up to Shin to see if he can survive his biggest test to date.

Another matchup in the middleweight division will be showcased on the card as Kim Dae-Sung (4-4, Team Crows) meets Wonju’s own Lee Jong-Hwan (0-1, ROAD Gym Wonju). Kim is riding a 2-fight win streak with a submission over China Strongman Zhang Jianjun, and a KO over the tough Kuwabara Kyoshi. Lee had a very promising amateur start, but his first pro fight he met the phenom Kwang In-Su and ended up being the first KO victim. With a year under the tutelage of Kim Soo-Chul and Yoo Jae-Nam, he’s ready to get back and prove himself.

Kim Dae-Sung versus Lee Jong-Hwan will be experience versus youth as each man seeks to make his mark in the expanding ROAD FC middleweight division.

The sport of MMA is booming in Asia; since 2010, ROAD Fighting Championship has been at the forefront of the incredible growth. In this new era of Mixed Martial Arts, ROAD is committed to creating more opportunities for all fighters in growth, experience, and support. The amateur and semi-pro Central and Into Leagues provide a structured, safe, and competitive atmosphere for beginning fighters. The Young Guns undercard series brings these up and coming fighters into the spotlight as professionals.

Previous articleUFC: Volkan Oezdemir shows off broken nose that forced him out of UFC 227
Next articleSuleiman and Guseinov to fight at Brave 14