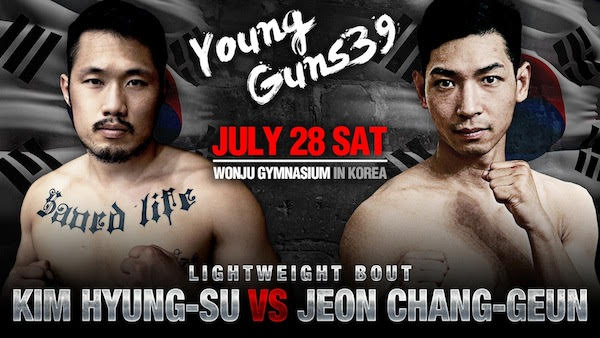 Jeon announced his presence on “Fearless Guys” by calling himself a “Fighting Genius”. He then proceeded to back up his claim with dominance in the drills and skill tests, rising through the sparring and matches to win the whole competition. Jeon’s first pro appearance in ROAD FC is highly anticipated since the season’s end.

Kim Hyung-Su versus Jeon Chang-Geun will be an interesting match between a wrestler with striking skills and an all-around fighter looking to make their way into the very deep lightweight division.

Yoo Jae-Nam (5-7, ROAD Gym Wonju) is the long-time training partner of former ROAD FC Champion Kim Soo-Chul. During his career he’s faced bright times as a hot prospect, and stumbling stress with a string of losses, but always delivered exciting performances. Yoo recently broke his spate of bad luck with a first round choke submission victory over Tatsuhito Satsuma.

Han Yi-Moon (4-3-1, Team Finish) entered the TV show “Crying Fist” as a teenager and became an instant standout by showing off his aggression and strong skills. He went through a 4-year professional MMA career and then stopped to complete his military service. Han’s last match saw him draw with Yuan Ye in a thriller, and fans will remember this well when he returns to the cage for the first time in over two and a half years.

Yoo Jae-Nam versus Han Yi-Moon is a battle between two well-known Korean fighters who have complete skill sets – will Yoo continue his climb or will Han make a brilliant return?

Finally the rematch for the unification of the Middleweight Championship between Champion Cha Jung-Hwan and Interim Champion Choi Young will take place. The first match between Cha and Choi was at ROAD FC 035. Later Choi was injured and unable to defend the belt, so Cha faced Kim Hoon and won a 3-round war which earned him the Interim Middleweight Championship title. The highly anticipated rematch will be full of emotion and aggression.

Also on ROAD FC 048, top middleweight prospect Hwang In-Su will face impressive grappler and excellent striker Yang Hae-Jun. Another middleweight match between homegrown fighters La In-Jae and Jeon Uh-Jin deepens the pool of the division, and will be a clash of two brutal wrestlers. A women’s atomweight match between Lee Ye-Ji and Arai Miki will showcase the skills of two very promising and increasingly well-rounded MMA prospects.

Previous articleSuleiman trains with Brazilian stars ahead of Brave 13
Next articleFighters Missing Weight in the UFC: A failure or a tactic?