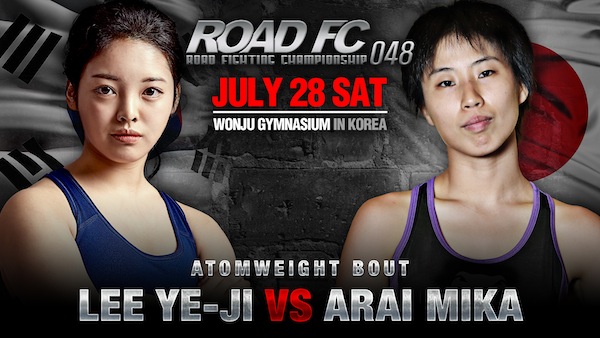 Lee Ye-Ji (3-3, Team J) of Korea started her MMA career at 16 and now faces her first fight as a university student. She experienced 6 matches in 3 countries against the stiffest of competition, including massive veterans Hisae Watanabe and Satoko Shinashi, a loss which she avenged. Lee narrowly lost a split decision Tomo Maesawa in her most recent outing, which showed her exactly what she needs to work on. But an injury kept her out of a return with Miki Araki, so she makes her awaited return no longer as “The High School Fighter”.

Arai Mika (3-0, Miburo) of Japan started MMA in the amateur Shooto leagues, which gave her the foundation for a promising pro career. She debuted one year ago in ROAD FC 039 by decisioning the tough Hong Yoon-Ha. Arai showed her natural strength in DEEP Jewels by knocking out Furuse Mizuki, then winning a decision against the much more experienced Pan Hui. Arai is a closely watched rookie in women’s MMA this year.

This women’s atomweight match between Lee Ye-Ji and Arai Miki will showcase the skills of two very promising and increasingly well-rounded MMA prospects.

La In-Jae (7-0-1, Team Korea MMA) is a dominant wrestler with powerful striking who has worn down opponent after opponent, going undefeated. His only draw was a brutal battle with Dong Xin that had the crowd gasping with every punch. Since then, La has earned decisions over Cha In-Ho and Lim Dong-Hwan and shown that he can dismantle whatever game plan is brought to him with grinding precision.

Jeon Uh-Jin (3-3, Monster House) started in MMA as a tough as nails prodigy who quickly rose to the top of the middleweight division with impressive performances. He eared a shot at former ROAD FC Middleweight Champion Riki Fukuda in Japan, but his early title opportunity was ended by KO. Undeterred, Jeon took his military leave so he could refocus. Fans will expect to see his impressive striking and grappling back in action.

This middleweight match between homegrown fighters La In-Jae and Jeon Uh-Jin deepens the pool of the division, and will be a clash of two brutal wrestlers.

Finally the rematch for the unification of the Middleweight Championship between Champion Cha Jung-Hwan and Interim Champion Choi Young will take place. The first match between Cha and Choi was at ROAD FC 035. Later Choi was injured and unable to defend the belt, so Cha faced Kim Hoon and won a 3-round war which earned him the Interim Middleweight Championship title. The highly anticipated rematch will be full of emotion and aggression.

Also on ROAD FC 048, impressive prospect Hwang In-Su will face veteran Yang Hae-Jun. Hwang’s first year run saw him knock out all opponents in the first round, including successively more experienced Park Jung-Kyo and Kim Nae-Chul. Impressive grappler and excellent striker Yang is expected to be the challenge to see if Hwang can last longer and show what he really knows. The ROAD FC middleweight division is getting interesting!