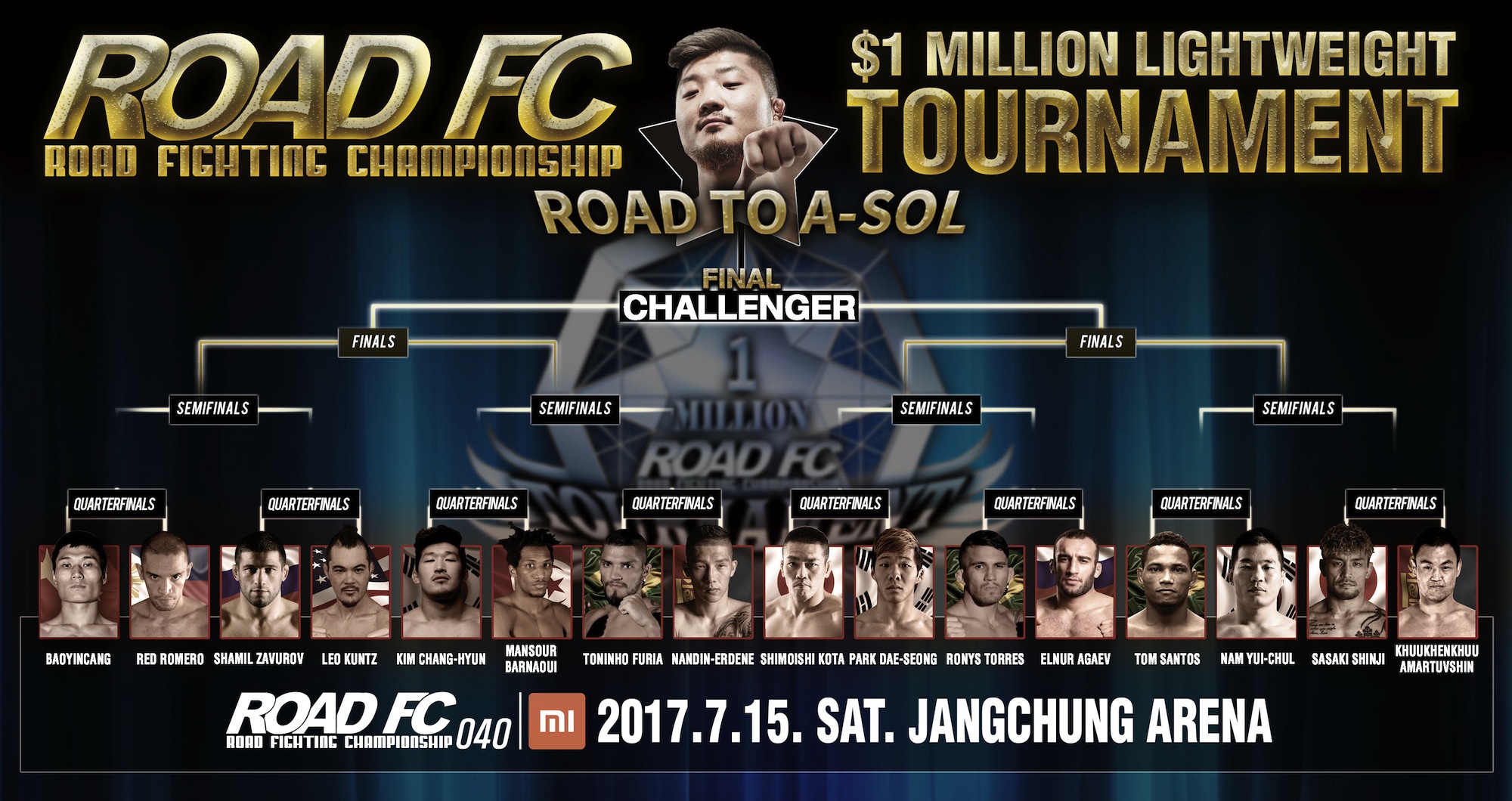 June 14, 2017 – ROAD Fighting Championship announces the final two matches for the Opening Round of the 16-man $1 Million Lightweight Tournament beginning at Xiaomi ROAD FC 040 on July 15, 2017 in the Jangchung Arena in Seoul, South Korea.

MMA Dragon Fight and kickboxing S-Battle Champion Tom Santos (10-3, BrazilThai) will rematch former ROAD FC Champion Nam Yui-Chul (18-7-1, Sanae Nam MMA). After his stint in the UFC, Nam was set to return to fighting in Korea with his International Trials match against Legacy Champion Mike Bronzoulis, but Bronzoulis was unable to travel. Santos stepped in on three days’ notice and knocked out the former ROAD FC Champion to get a spot in the Tournament.

Multiple Muay Thai title holder Rafael Fiziev (4-0, Phuket Top Team) soundly defeated Kim Seung-Yeon and was earmarked to face Santos, however, Fiziev broke his hand in the match and will be on extended injury leave. Therefore, in consideration of his former title, and the late notice new opponent, Nam Yui-Chul will re-enter the Tournament in the opening round against Tom Santos.

Former URCC Lightweight Champion Red Romero (12-6, BAMF MMA) will face China standout Baoyincang (Xindu Martial Arts, 10-3-0-1) for the final opening round match. Romero earned his shot in a 4-man single night tournament for Southeast Asia in URCC. As one of the most decorated Philippines fighters, Romero has proven his well-roundedness and heart in the cage. Baoyincang soundly defeated several of China’s top welterweights before transitioning to lightweight, and his impressive performance against fellow Tournament entrant Nandin-Erdene at ROAD FC 027 made him an excellent fill in for the final China Trials bout.

Romero and Baoyincang are two of the region’s most unsung heroes who finally have a chance to prove their worth in an international Tournament of epic proportions.

In addition, there will be two reserve matches in preparation for any situation that requires a substitute fighter.

First, Jung Doo-Jae (32-17-1, Ronin Crew) will face Alexander Merezhko (7-1, MFP). Jung is one of the most experienced Korean fighters with a strong base in boxing. Merezhko has defeated fellow Tournament competitor Agaev twice, most recently to with the MFP Welterweight Tournament.

Second, Lee Hyung-Seok (14-9, Team Hon) will meet Park Hae-Jin (3-1, Ssen Gym). Lee has a long and strong history of international competition which put him in the International Trials against Toninho Furia. He went the distance but lost the decision. Park is an up and comer looking to make his mark in the division. Lee and Park both possess a particularly strong BJJ base so fans can expect a grappling display.

Shinji Sasaki vs Amartuvshin Khuukhenkhuu: Former Shooto Champ Sasaki is a grappler with KO power, and Mongolian top ranked Khuukhenkhuu is a judoka and sambo fighter, so the tone of this match is very unpredictable.

Shamil Zavurov vs Leo Kuntz: Octagon FS Champ Zavurov is technical and tough whereas Impact FC Champ Kuntz is an unorthodox finisher; both men are both well-rounded fighters that will deliver an exceptional match.

Shimoishi Kota vs Park Dae-Sung: Former DEEP title challenger Shimoishi is at the top of his career while hot prospect Park is just coming into his, and both are facing the most important fight of their lives.

Ronys Torres vs Elnur Agaev: Shooto Brasil Champ Torres likes to show off his superb technique to get a finish, and MFP warhorse Agaev uses his grinding strength for the same, so this will definitely be an interesting style versus style bout.

As previously announced, the Main Event for Xiaomi ROAD FC 040 will be Openweight Champion Mighty Mo making his second title defense against Kang Dong-Kook in what is sure to give the fans of hard-hitting heavies a match worth remembering. Also, Riki Fukuda versus Kim Hoon will finally meet in a clash of opposite styles. Champion boxer Raika Emiko will take on champion Taekwondo fighter Kim Hae-In in a Women’s flyweight bout. 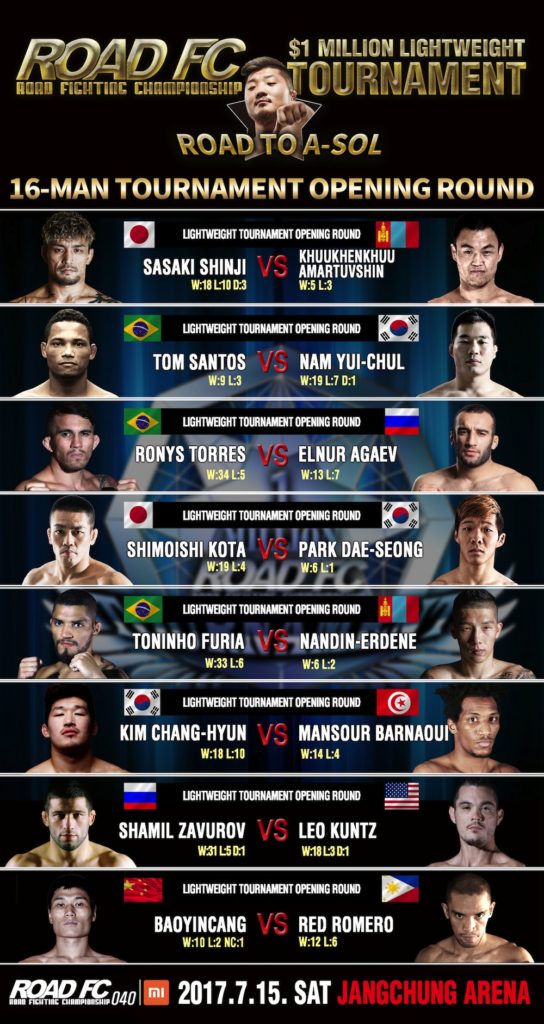