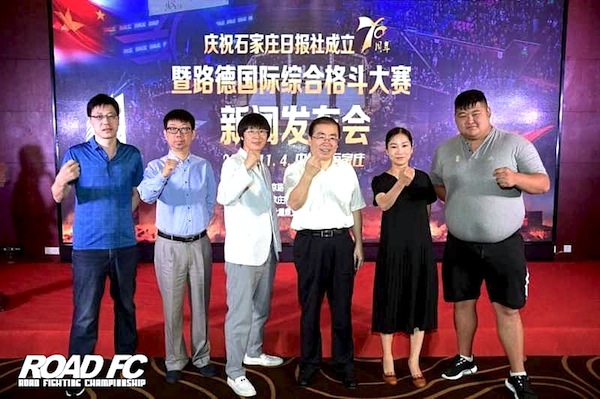 Prior to this event, Xiaomi ROAD FC 042 will be held during the Chungju World Martial Arts Festival in Chungju, South Korea on September 23.

In December 2015, ROAD FC first entered China to hold an event in Shanghai. Since then, the cities of Beijing, Changsha and Shijiazhuang have also hosted competitions. ROAD FC created history with the first live MMA broadcast on China’s state broadcaster, CCTV, and achieved six consecutive record-breaking ratings with a high of 40 million live viewers.

ROAD FC’s brand awareness in China has steadily increased, including not only MMA events, but television programming and educational outreach. The mini-series “Beijing ROAD Man”, which showcased ROAD FC fighters from Korea and China battling one another in fun games and MMA-related trials, was a viral hit and will pave the way for future programming. In Beijing in May, China’s first university student MMA competition has hosted by ROAD FC, and starting in the second semester of 2017, Peking University will be the first university in the world to establish a “ROAD Grappling Course” to which all students can apply. “Road Grappling” is to be introduced to other major universities in China.
“In the past two years, with the strong support of domestic policies, China’s sports industry has ushered in an unprecedented period of rapid development, and combat sports events are particularly bright,” said Mr. Fan of the Shijiazhuang Daily. “Hosting an international sporting event with ROAD FC will not only enrich the public’s daily cultural and sports life, but will also set a benchmark for such events across the country.”

ROAD FC has entered China over the past few years, has become an audience favorite, and is highly sought after. ROAD has entered the hearts of the Chinese fans. Future events will be even more exciting, with a higher level of expectations,” stated Mr Zhang of Beijing ROAD.

Aorigele commented, “”Shijiazhuang has a special significance for me. Here, at ROAD FC 034, I knocked out my opponent which led my career to reach a new peak. On behalf of all ROAD FC fighters, I believe we will show you wonderful performances at ROAD FC 043.”

ROAD FC CEO Jung Mun-Hong stated, “We greatly appreciate the support from the city of Shijiazhuang and wish to promote two events a year here. We also plan to hold events in Shanghai and Beijing.”

The next event will be Xiaomi ROAD FC 042, held on September 23 at the Chungju World Martial Arts Festival sponsored by UNESCO.

In the main event, Aorigele versus Masuda Yusuke pits power versus experience, and when these giants clash, expect fireworks. A Pride-era throwback is set between two legends of the sports: Minowa Man vs Yoon Dong-Sik. The prowrestler and the standout Judoka will clash at middleweight. An Openweight rematch between Kim Chang-Hee and Shim Gun-Oh is set after an unfortunate accident stopped their first match too early. Now the brawling big men are eager to get back into the cage and show off kickboxing versus wrestling.

Also, breakout fierce young fighter Park Jung-Eun and ROAD FC Women’s Atomweight Champion Ham Seo-Hee’s teammate Park Si-Woo will make for a thrilling match in a battle of the hot prospects. Shin Dong-Guk versus Imai Shunya will be a very aggressive battle as both strive to remain on a win streak. Catchweight at 86kgs big men Kim Eun-Soo and Kim Dae-Sung both have a penchant for getting into first round collisions, so this match up should be a real banger, if even only for a minute.

Previous articleFloyd Mayweather gets his 50th win as he stops a gassed McGregor in the 10th Round.
Next articleMayweather – McGregor, and the Achilles heel for OTT service providers