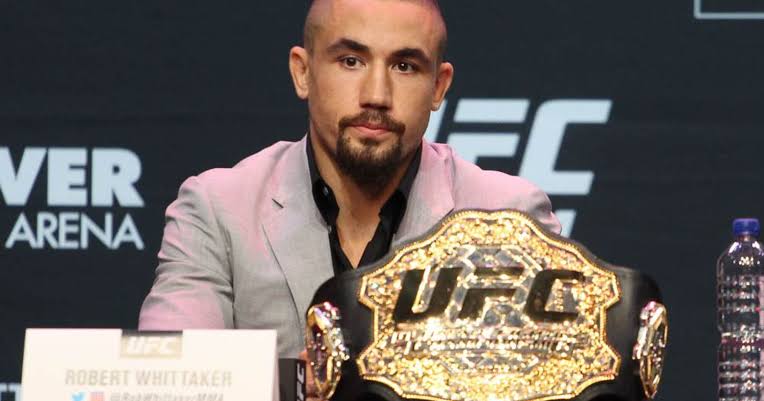 Robert Whittaker escaped, what could have been, a very fatal situation for his health. The last moment discovery of his collapsed abdomen and internal hernia and his eventual surgery prevented long term damages to his health.

In a video posted on his YouTube channel Wednesday night, Whittaker was happy that now the surgery is successful and he is on his way to a healthy recovery. “I’m in good spirits. I’m thankful that I still have my health and that they found it before I fought, and I can walk away from this and fight at a later date. My whole thing is I want to heal, train, and then fight. My health comes first. I need to make sure I’m healthy, and then I’ll fight anyone, anywhere.”

Meanwhile, the middleweight division is becoming more and more stacked. Israel Adesanya, who defeated Anderson Silva last week, along with Kelvin Gastelum have been rallying for a title shot next. This is owing to the fact that Whittaker may not be able to return to action as early as June.

Amidst all this Robert is as calm as the eye of the storm. “With Anderson and Adesanya just fighting, I don’t know what that does,” Whittaker said. “I don’t know what the UFC is going to make. I’ve never picked a fight. They just line them up, and I beat them, and that’s exactly what I’ve done. I’ve never tip-toed my way to the title. …

“I’m not worried. I don’t know what the UFC want to do with Gastelum and Adesanya now because obviously, I’ve heard a lot of things. How the UFC wants to go about lining up either Gastelum still or Adesanya, or getting them to fight someone before, I think it certainly spices up the division. (Yoel) Romero and (Paulo) Costa have been calling out Adesanya. I know that there’s lifeblood in the division.”

During UFC 235, despite not even stepping in the Octagon for a title shot, Kelvin Gastelum was seen flaunting a UFC belt. It was later discovered that it was Henry Cejudo’s belt.

Whittaker, however, found the stunt cute.

“You know when your kid finds your work belt at home and then he starts wearing it around the house? That’s kind of how I saw the whole thing,” Whittaker said. “It was adorable.

“I feel bad for him that he trained and made the trip out here, and then I couldn’t give it to him. I apologize for that, but obviously my health comes first. It is what it is. … His health was looking a bit shocking, as well. It’s just one of those things. Maybe it was better for both of us.”