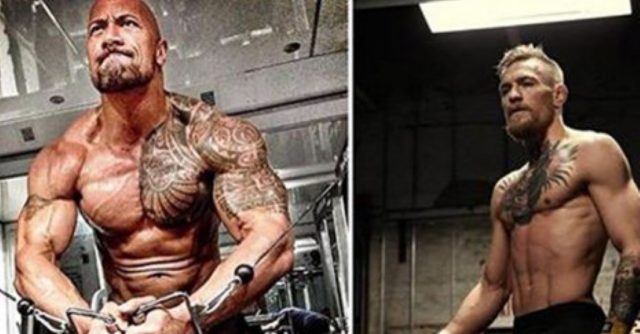 Conor McGregor is not new, when it comes to rubbing shoulders with some of the biggest stars in the world.

We have seen Lebron James share his admiration for McGregor’s worth ethic on Twitter. Cristiano Ronaldo once drove into McGregor’s gym in Las Vegas to get a photo-op. Now, latest in the addition is WWE Legend and one of the biggest stars in Hollywood – Dwayne Johnson, more commonly ‘The Rock’. 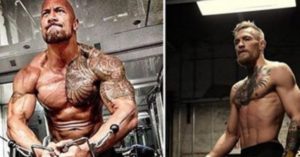 The Rock regularly shares his day-to-day endeavors on various social media platforms, and on a rare off-day got himself time to view Conor McGregor’s documentary ‘Notorious’. The Rock took to Instagram to share his admiration for MMA’s biggest star, and shared his views on hard work.

“Saturday night doc viewing.
@thenotoriousmma NOTORIOUS.
Great insight into the DNA of this successful and smart business man.
Best part of his success, is when you strip it all away – it will always come down to being the hardest worker in the room.
Those roots never go away.
Solid doc. Well done brother” – ‘The Rock’ Dwayne Johnson posted on his instagram feed.

Conor McGregor couldn’t have been happier.

Thank you Rock! Your work ethic is inspiring to me and I appreciate these words very much!
Big respect my Uce 🙏 – ‘The Notorious’ Conor McGregor replied to the post.

Conor McGregor, who shares many similar characteristics to ‘The Rock’ – might not be as active as he once was, but his mark on the MMA scene, has been seismic.

Previous articleUFC: Kamaru Usman believes he should fight for the belt next
Next articleUFC: Israel Adesanya feels Brad Tavares is more suited to his style, claims MMA athletes are the best in the world