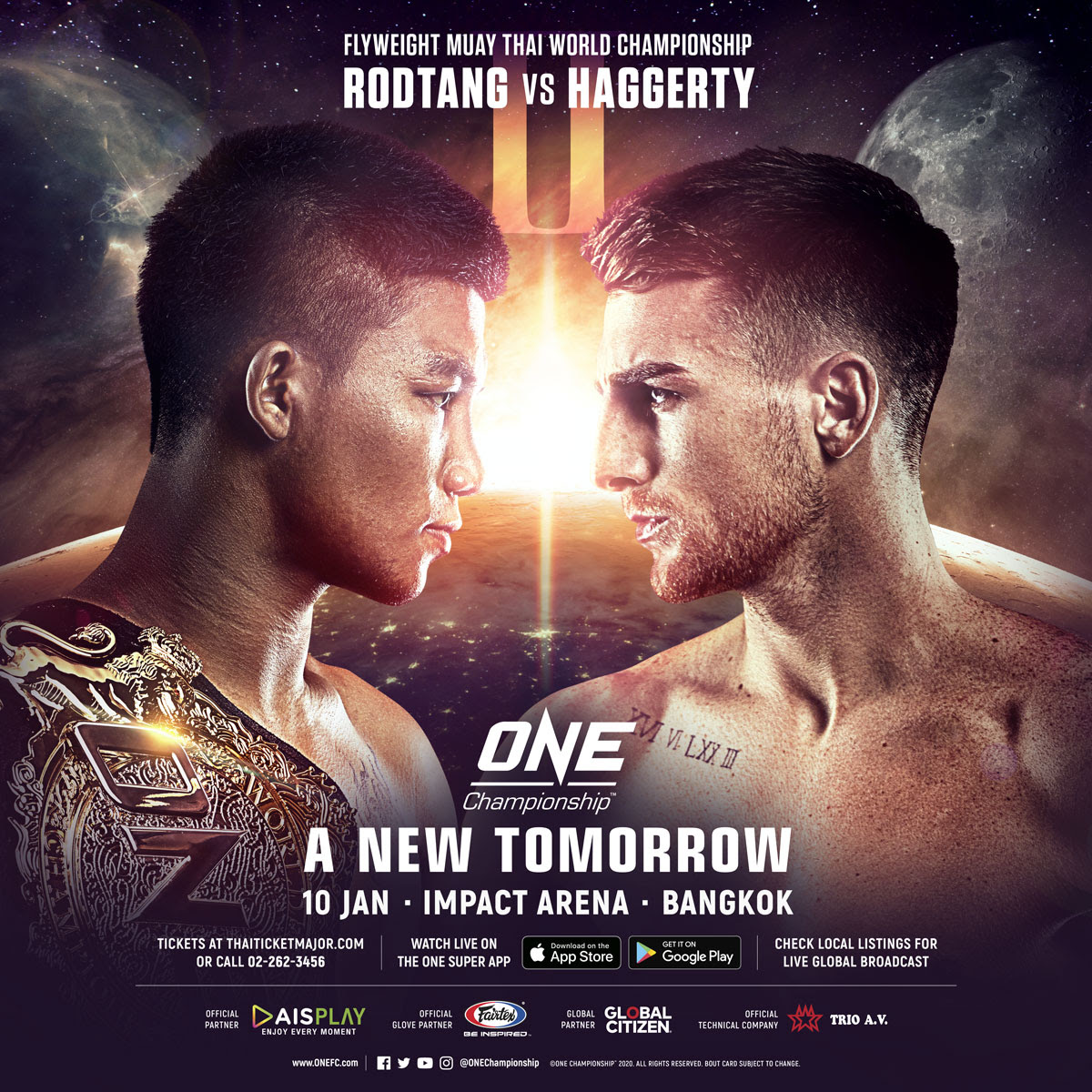 COMPLETE CARD ANNOUNCED FOR ONE: A NEW TOMORROW IN BANGKOK

The largest global sports media property in Asian history, ONE Championship™ (ONE), has just announced the complete card for ONE: A NEW TOMORROW, set for the Impact Arena in Bangkok on Friday, 10 January 2020. ONE Championship’s first event of the new year brings together an exciting ensemble of the world’s greatest martial arts talent, who are set to take the global stage and showcase their incredible skills.

In the main event, reigning ONE Flyweight Muay Thai World Champion Rodtang “The Iron Man” Jitmuangnon of Thailand will take on England’s Jonathan “The General” Haggerty in a highly-anticipated rematch for the ONE World Title.

Like many Thai warriors before him, Rodtang started training in Muay Thai when he was a young boy, competing in his first professional bout at the age of 10. Initially training at a small camp in his hometown of Pattalung, Rodtang eventually made the permanent move to Bangkok to hone his skills at the famed Jitmuangnon camp.

By the time he turned 21, Rodtang had already garnered over 250 wins, capturing the prestigious Omnoi Stadium World Title twice. He joined ONE Super Series not long after, and lifted the ONE Flyweight Muay Thai World Championship last August after earning a hard-fought Majority Decision over Haggerty. He then successfully defended the belt with a Split Decision win over Brazil’s Walter Goncalves.

Haggerty, on the other hand, stormed into ONE Super Series with victories over Joseph Lasiri and Thai legend Sam-A Gaiyanghadao, showcasing his unique striking style in the process. The win over Sam-A earned him the ONE Flyweight Muay Thai World Title, which he surrendered to Rodtang in his first defense.

The first meeting between Rodtang and Haggerty was extremely close. This rematch aims to settle the dispute and determine the rightful owner of the ONE World Title.

ONE Atomweight Kickboxing and Muay Thai World Champion Stamp Fairtex of Thailand continues her quest for the mixed martial arts World Title when she takes on India’s Puja “The Cyclone” Tomar.

Stamp is 3-0 in mixed martial arts competition, recently winning both of her bouts in 2019 over tough opponents. Stamp has expressed her commitment to focus on her mixed martial arts career. Against Tomar, she will be facing an experienced veteran who poses a solid challenge.

Also on the card is Maira Mazar of Brazil who takes on Japan’s Ayaka Miura in a three-round bout.

Mazar is making her ONE Championship debut, bringing power and a penchant for spectacular knockouts to the table. Miura, conversely, is riding a five-bout winning streak with two of those wins coming under the ONE banner.

Le has impressed so far in his time inside the ONE Circle, putting together a pair of thrilling knockouts against Yusup Saadulaev and former ONE Lightweight World Champion Kotetsu Boku. Le hopes for a similar result against Takahashi, a Shooto Pacific Rim Featherweight Champion who has won his last eight bouts.

A battle between rising stars ensues when featherweights Ma Jia Wen of China and Shinechagtga Zoltsetseg of Mongolia collide.

Ma is 6-2 in his ONE Championship career so far, showcasing tremendous finishing ability having ended four of his wins within the distance. Meanwhile, Zoltsetseg, a ONE Warrior Series contract winner, has won his last three bouts including two scintillating knockouts, setting up his ONE Championship main roster debut.

Also featured at ONE: A NEW TOMORROW is a plethora of highly-anticipated ONE Super Series Muay Thai matchups for striking enthusiasts.

Last last but not least, Victor Pinto takes on Adam Noi in a kickboxing bout.