Ronda Rousey in a WWE storyline. Could this be her new career? 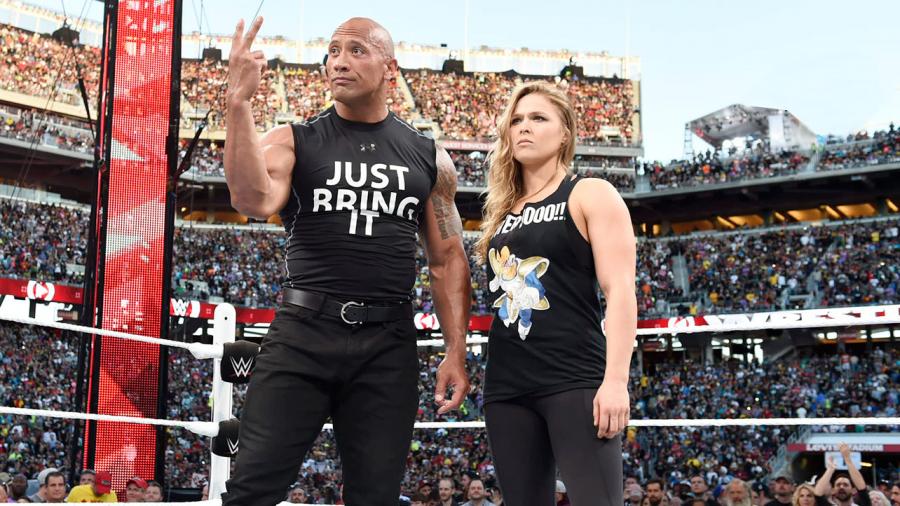 Ronda Rousey, one of the biggest UFC superstars was involved in a professional wrestling segment in the WWE when she was with her training partners Jessamyn Duke and Marina Shafir. The trio was waiting for their fourth group member of the group when they were confronted by three other WWE superstars; Charlette Flair, Becky Lynch, and Bayley.

In the WWE storyline segment, Duke, Rousey, and Shafir were being interviewed after their teammate Shayna Baszler won the WWE Mae Young Classic tournament second-round. Soon the interview was stopped by the three top WWE female wrestlers.

The six women got into a stare-off when Rousey took no time to issue a challenge. “You name the time, you name the place,” Rousey said. “…Oh, not today? We’re waiting to hear from you.”

The stare down was less than a minute as the group of Charlette, Lynch and Bayley parted ways. A women tag team action between two groups for Survivor Series pay per view would be nothing less than a classic match.

Baszler has made a crossover from MMA to Pro-wrestling. She’s a former UFC fighter with a professional MMA record of 15 wins and 11 losses. Currently, she is being promoted well by the WWE who is expecting big things from her.

Rousey, on the other hand, has made an appearance in the WWE before. Her first in ring appearance was at WrestleMania where she delivered a judo-throw to former WWE Champion Triple H and got her hand raised by The Rock.

It has been rumored for a long time that Rousey can make a shift to pro-wrestling after her two consecutive losses to Holly Holm and Amanda Nunes in the Octagon.

This isn’t the first time there has been a cross over between the two promotions. Brock Lesnar career in the UFC earned him a lot of fans and made millions for the company.

Lesnar was working for the WWE and later at the age of 28 made his switch to MMA with no prior experience in any combat sports besides college wrestling.

The former UFC Heavyweight Champion has played an important role in building up a relationship between the UFC and the WWE.

While the MMA Company had lent their top star Rousey to make a special appearance at WrestleMania, the WWE returned back the favor by lending Lesnar for UFC 200 while still being under the contract with the WWE.

Lesnar while still being active under the WWE banner fought Mark Hunt at the biggest Pay per view event of the UFC and won the match. This was seen the building block for a better relationship between the two companies.

In the past several UFC stars have been rumored to make an appearance in the WWE. Alistair Overeem had stated before that he would love to continue his feud with Lesnar in the squared circle after his time in the Octagon.

Triple H had also commented that he would be more than happy to have Conor McGregor in the WWE as it would make tons of money for the WWE.

Former 12 time boxing world champion Floyd Mayweather had made a short crossover from boxing to WWE when he took out the Big Show at WrestleMania 24.

Triple H had also stated that he would invite both McGregor and Mayweather to Monday Night Raw so they could showcase what they have.
http://www.youtube.com/watch?v=DFir-o038mo

Some of the top superstars in the UFC who can talk well have also been expected by many to make such transition. Stars like Michael Bisping and Chael Sonnen are always wanted by the fans to see what they can deliver in a WWE ring.

Now that many feel that Rousey MMA career is over, we can definitely expect her to show up in the WWE ring as she has been a big fan of professional wrestling.