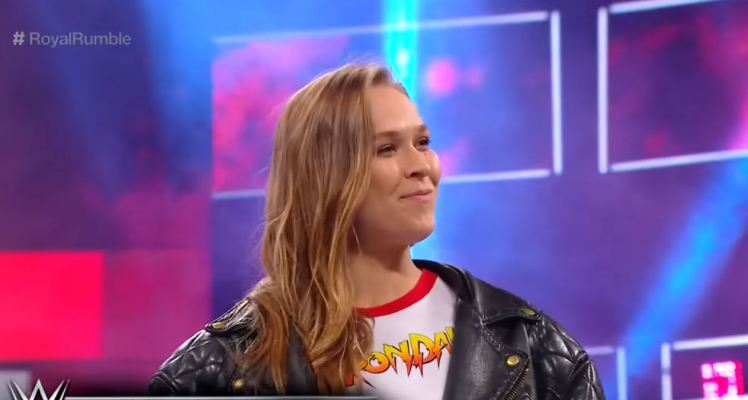 The former UFC Bantamweight Champion Ronda Rousey finally made her long awaited official WWE debut at this year’s Royal Rumble PPV event, making her appearance immediately after the inaugural Women’s Royal Rumble match. This however, was planned out and executed in stealthily by the WWE officials, which required an elaborate process.

Ronda Rousey shed lights on how she was brought all the way from another country to the arena where the event was taking place. The now WWE Superstar explains to ESPN that she was in initially in Columbia where she was shooting for her upcoming movie Mile 22.

She had to fly all the way to Florida where she boarded a private jet, followed by a ride in a car and later secretly being escorted to the building. The WWE usually keeps debut of stars a surprise to the WWE Universe (term used to refer WWE fans) and are usually brought to the arena of the show in utmost secrecy.

People expected her to enter the Rumble match but didn’t expect to see her post-match. Ronda Rousey stunned the crowd when her music was played. She posted on Instagram a video of her husband Travis Browne overjoyed at the sight of Rousey making her WWE debut.

It’s been revealed now that she has signed a deal with the WWE as a full time WWE professional wrestler. She has said that this would be her new job and this is what she would be doing from now on. She has already dropped a hint that she will be performing at WrestleMania 34.

It would be interesting to see how Rousey would perform at the grandest stage of professional wrestling when she will get into the ring with experienced performers like Alexa Bliss, Asuka and Charlotte Flair.