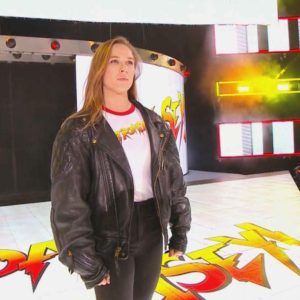 Ronda Jean Rousey is undoubtedly the most decorated Mixed Martial Artist & former Olympian Judoka. Rousey was the first American woman to earn an Olympic medal? in Judo (bronze), She is the former UFC Women’s Bantamweight champion, as well as the last Strikeforce Bantamweight Champion. She won 12 consecutive MMA fights, six in the UFC. She lost her belt against Holly Holm & later her come back against current champion Amanda Nunes was not successful either. Last year she got married to her boyfriend & fellow UFC fighter Travis Brown.

There was rumours that she can appear in WWE ROYAL RUMBLE & Ronda Rousey has signed the contract paper. Today her shocking entry in Royal Rumble was very good & she could change the face of WWE’s women’s division. Everyone in the arena was stunned & everybody was praising her. It can be a very big thing for WWE UNIVERSE. Nobody knows what is next for her is waiting but it will be very entertaining for the fans of WWE. Thanks to Stephanie & Triple-H for a new journey of Ronda Rousy.