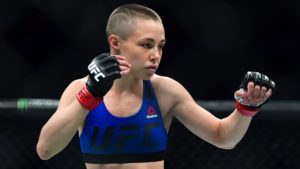 This is the first time that Rose will be defending her title in hostile territory and even though her opponent has shown her nothing but respect, Thug Rose is still vigilant of what’s ahead of her.

“My guards are still up high,” Namajunas told MMA Junkie. “I protect myself at all times. Obviously, we’re cordial and we’re respectful and it’s a great change of pace, but I always just focus on me and that’s it.”

Namajunas also plans to emulate Ronda Rousey as she was the only champion to successfully defend her UFC title in Brazil at UFC 190 back in 2015.

“Human curiosity is a crazy thing and it’s all about if I can do it or not, or will I?” Namajunas said. “I know I can so it’s just a matter of whether I can.” (H/T – MMA Junkie)

Do you guys think Rose Namajunas will be able to repeat Ronda Rousey’s feat in Brazil?