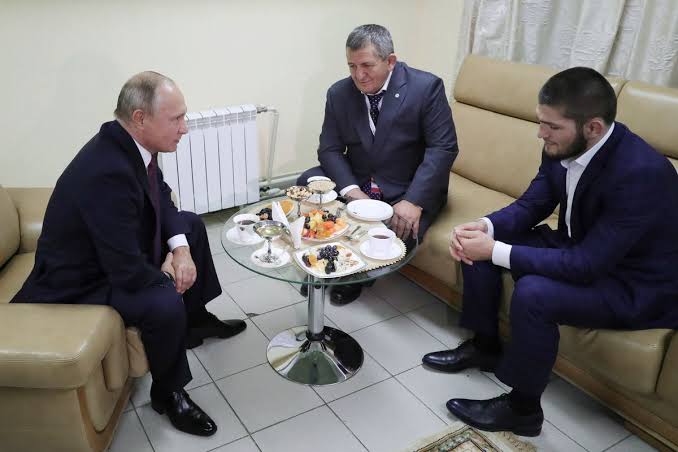 After his win over Conor McGregor, Khabib Nurmagomedov’s life seems on a high.

Khabib Nurmagomedov has gained more than 4 million followers on Instagram.

In the post-fight interview at UFC 229, Khabib told he got a call from Russian President Vladimir Putin.

Khabib said, “He (Vladimir Putin) just call me, and he says he very proud of me. I win, and he says Congratulations.“

On returning back to his home soil, the two had a more formal meeting where they exchanged few words with one another. The lightweight champion sat down to meet with President Putin during the “Russia — Country of Sports forum in the city of Ulyanovsk.”

Khabib Nurmagomedov was accompanied by his father and team leader, Abdulmanap Nurmagomedov.

According to a translation from RT Sports,
Vladimir Putin praised Khabib’s victory over Conor McGregor “worthy and convincing”. Mentioning the comments made recently by Khabib’s father Abdulmanap about giving Khabib a harsher punishment than UFC or the Nevada State Athletic Commission ever could, the Russian President told Nurmagomedov he’ll ask for leniency on his behalf. “I will ask your father not to punish you too strictly, because you achieved the main task, worthily and convincingly,” said Putin via RT Sports.

Previous articleDustin Poirier out of UFC 230 fight against Nate Diaz
Next articleJon Jones vs. Alexander Gustafsson 2 is set for UFC 232 on Dec. 29 in Las Vegas