Ryan Bader knocked out MMA legend Fedor Emelianenko within 35-second of the first round to become Bellator’s first ever two-division world champion. With this win, he has also won the heavyweight Grand Prix. 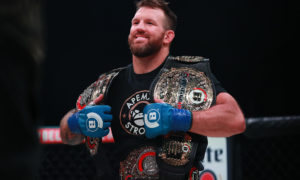 Now, double champ Ryan Bader has shown interest in fighting UFC heavyweight champion Daniel Cormier in a cross-promotional fight. Although both guys have traded verbal barbs before back in a press conference in 2015 when Cormier called Bader the easiest fight in the division.

“I’m over that,” Bader said via MMA Fighting. “But he’s one of those guys, he proves himself over and over again. He’s a champ, in and out of the cage there, beating monsters. Nothing but respect from over here.”

“It’d be fun to do a cross-promotion for the champ -champ-champ-champ, but we’ll see if that ever happens.”

Cormier captured the UFC heavyweight title last year when he knocked out Stipe Miocic in the first round to simultaneously hold titles in the light heavyweight and heavyweight division.

Who do you guys think takes this fight, if they ever fought?