Sean O’Malley cleared by NSAC to return at UFC 248

Sean O’Malley will be finally able to make his Octagon return in more than two years. The Nevada State Athletic Commission has cleared the undefeated bantamweight prospect to fight at UFC 248.

O’Malley (10-0 MMA, 2-0 UFC), hasn’t fought since UFC 222 when he took on Andre Soukhamthath. He defeated Andre via a unanimous decision. He has had drug-related issues since then. 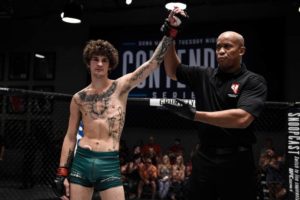 NSAC voted unanimously to approve the suspension, which is retroactive to May 25, 2019 and runs until Feb. 25.

He first tested positive for Ostarine in September of 2018 following which he had to pull out of his scheduled bout at UFC 229, which went on to become the highest-selling PPV in UFC history.

He was suspended for six months by NSAC after he denied taking the substance knowingly and He was again scheduled to fight at UFC 239 but had to pull out after he tested positive for the same substance.

NSAC found elevated levels of Ostarine following which the commission decline to issue him a license to compete against Chito Vera.

Daniel Rubenstein who is Sean’s manager revealed that through 2018 and 2019 and it was revealed that the drug had a long time pulsing effect, an issue which also effected UFC light heavyweight champion, Jon Jones.

Sean will also be subjected to random drug tests every month and the Ostarine levels shouldn’t exceed 100 picograms per millilitre.

”Sean appreciates the due diligence of the NSAC and USADA to work to get his name cleared for the March 7th UFC 248 fight in Las Vegas, NV,” Daniel Rubenstein said. “He looks forward to making his UFC return on an enormous fight card in the fight capital of the world and showing his fans how much he has improved in the last two years away from fighting.” (H/T – MMA Fighting)

Are you guys excited for his Octagon return at UFC 248?

UFC 248 takes place at the T-Mobile Arena in Las Vegas on March 7.