Cejudo defeated former bantamweight king Dominick Cruz via second-round TKO at UFC 249 in May. After which he shockingly announced his retirement from the sport. The announcement raised some eyebrows across the MMA community as Cejudo was at the peak of his career.

Many believe Cejudo has just stepped away for a while so he could set up an even bigger comeback as he keeps calling out various fighters from flyweight to even featherweight division. Cejudo also claimed that even a high school wrestler will beat O’Malley.

‘Sugar’ however believes Cejudo retired so that he couldn’t face him and the current champ, Petr Yan. (via BJPENN.com):

“I don’t really care to shut up those people. Those people’s opinions, I’m going to fight a wrestler. I’m in the UFC and I’m 25-years-old. I’m not worried about it. Cejudo retired, I don’t understand,” Sean O’Malley said on Just Scrap Radio. “I think he was scared of Petr Yan because he knew Petr was going to be next so he thought he should get out while he still can because Petr would f**k him up. Henry is a little scared to fight. He saw that I was coming up and he saw a couple of other threats and got scared.”

O’Malley the future of the bantamweight division?

The undefeated contender (12-0 MMA, 4-0 UFC) is considered by many to fight for the title in near future and serve as a potential cash crop for the organization. He achieved exponential fame after brutal knockout on Dana White’s Contender Series, which gave him the contract. 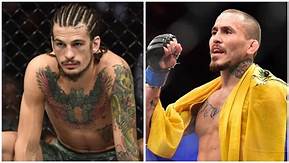 However, O’Malley will have to pass through veteran Marlon Vera at UFC 252 this weekend. The 14-fight veteran is on a five-fight winning and finishing streak at bantamweight, including both knockouts and submissions. Taking on Vera is a huge step up in competition. A win over an experienced and well-rounded contender like him will definitely pave the way for O’Malley towards the elite cream of the crop of the weight class.