The judges scored it 29-24, 29-26 and 29-25 for Nunes. She is currently riding on a 10-fight winning streak in the UFC. With her latest win, she has now surpassed Jessica Andrade for the most wins in the UFC. 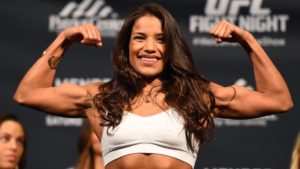 “Tonight I proved I’m ready for five rounds,” said Nunes who has finished eight opponents in the UFC in the very first round.

“My game plan was to go five rounds and work the takedown,” said Nunes. “Honestly, I was a little bit off tonight, but I’m the champ, I always have plan A, B, C and more. If something goes wrong with the first plan, I just go to the next one. I couldn’t get my timing well with the striking, so I decided to go to the takedowns.”

She now holds wins over the likes of Germaine De Randamie, Holly Holm, Cris Cyborg, Raquel Pennington, Ronda Rousey, Miesha Tate etc. Her sole loss in the UFC came to Cat Zingano at UFC 178, where she was knocked out in the third round.

Her title run in the UFC has been a very dominant one and no one has been able to find her weakness ever since her loss to Zingano.

Rousey's kryptonite was a kickboxer. Holly's was a savvy submission artist. Miesha's was a heavy hitter who was also good on the ground. What's Amanda Nunes' kryptonite? I don't see one. She's on a level completely to herself.

“Rousey’s kryptonite was a kickboxer. Holly’s was a savvy submission artist. Miesha’s was a heavy hitter who was also good on the ground. What’s Amanda Nunes’ kryptonite? I don’t see one. She’s on a level completely to herself,” ESPN MMA journalist Brett Okamoto tweeted.

Pena has just one loss in the UFC against Valentina Shevchenko. In her last fight, she defeated Nico Montano via unanimous decision.