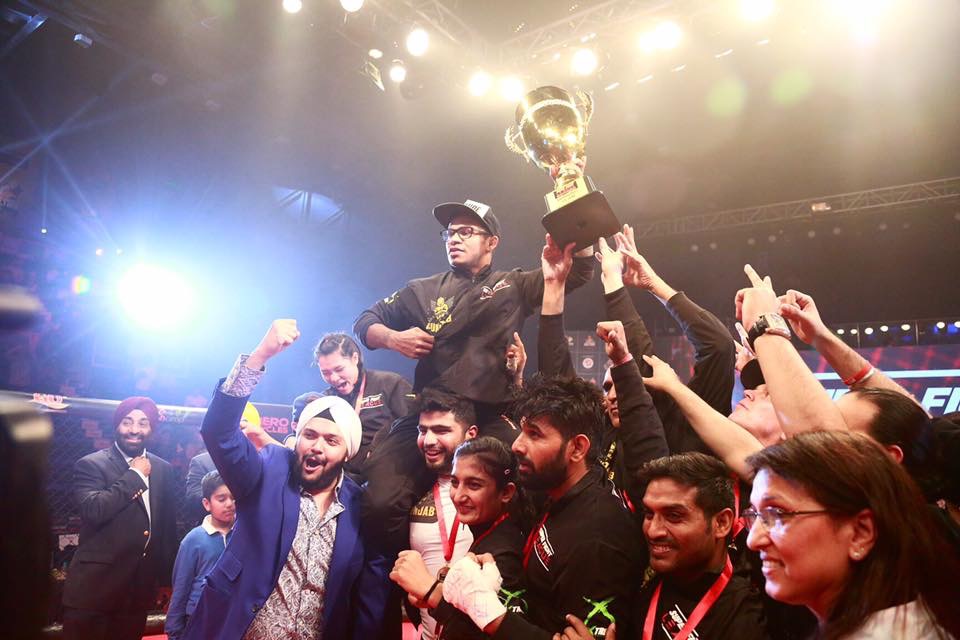 The first ever MMA league tournament concludes after more than a month of exciting fights that featured India’s top MMA talent. The final matchup between Sher-E-Punjab and Delhi Heroes was touted to be a tough competition. On paper, it looked like the championship belonged to the Delhi Heroes who had a strong team going in the finals. But to everybody’s surprise, Jacky Gahlot (the undefeated featherweight) was not included the final 6. Was this a big decision error by the team? Only the Delhi Heroes can answer this.

Nonetheless, the tournament proved to be a breeding ground for new talents like Asha Roka and there was a lot to learn & improve from the previous matches. One major improvement was the refereeing – not only did it get better in the cage but it was a sight to see the two referees outside the cage helping and making sure the refereeing was always spot on. Let’s look at all action that went down yesterday.

The Veteran Gets Schooled

Despite being a BJJ black belt and a veteran in the submission tournaments, Neto could not get pass the Sher-E-Punjab Captain Kantharaj. All through the three rounds, Kantharaj maintained a dominant top position and Neto tried his best to neutralize the on pouring shots. Aghasha could easily take Neto down and get into full guard to control the fight. Neto pulled guard a couple of times but it was Aghasa who stayed active on top by delivering heavy hammer fists. Aghasa gets a unanimous decision win and gives his team their first 3-point lead. 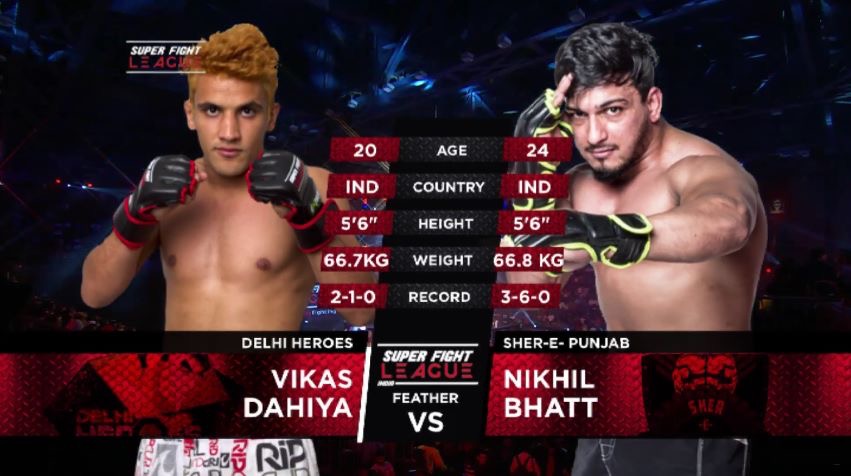 Nikhil Bhatt looked to avenge his loss against Vikas and began putting pressure right from the start. Nikhil slams Vikas to the ground and gives up his neck, which Vikas managing to hold a neck crank position. Nikhil transitions to the full mount and from there on controls the momentum of the fight by peppering punches from the top. By the end of the 1st round, Vikas manages to get back up. Nikhil gets the 1st round. A quick flurry of punches is exchanged as the 2nd round begins. Nikhil over commits, which Vikas capitalizes by changing level and takes Nikhil to the ground. This time Vikas is on the top and tries to make the best use of his position. Round 2 goes to Vikas. Getting into the 3rd round, Vikas starts adding kicks into his game. Nikhil makes the same mistake and Vikas does a good job of slipping the over hand right and takes Nikhil down. Vikas is in full control till the end of the 3rd round.
Decision win for Vikas gets Delhi Heroes 3 points.

Asha Roka promised she would deliver a KO win in the finals and she did keep her word. Asha Roka’s striking was no match to the debutant Liz Pereira. Liz tried to take Asha to the ground, but took a lot of hard punches in the process. Referee stands them up, but before Liz could make her next move Asha’s flurry of punches landed on the chin and down went Liz. Asha gives her team Sher-E-Punjab a 6-point lead with a devastating KO.

Despite coming in the fight with bruises from his previous match, Patrick Benson was in high spirits to take his team further in lead. Patrick rushes in with knees and easily takes Meena down, from there on, it’s a downhill for the 12-fight veteran. Attempting to get back on the feet, Meena gets locked in the d’arce choke and within 35 secs the fight ends. Patrick gets the submission win and extends Sher-E-Punjab lead to 14 points.

Captain Gets It Done…but Not Enough 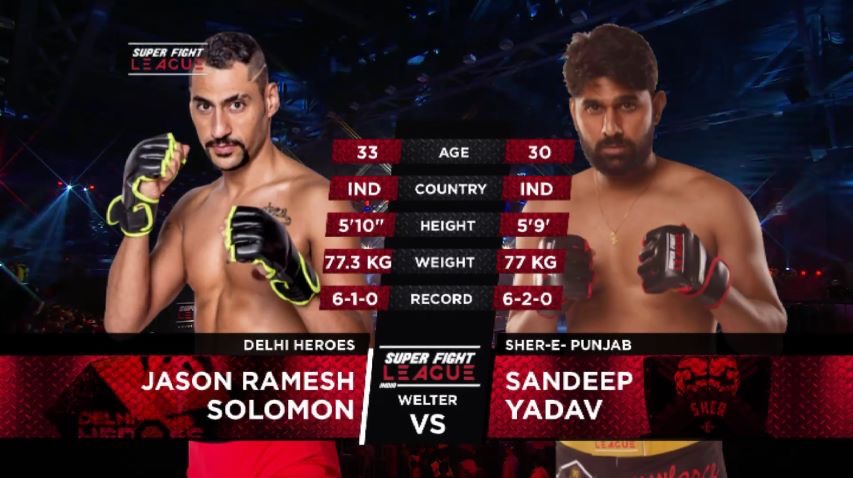 The Dehi Heroes were way behind on the scoreboard with only 3 points to their name. They needed another 12 points to win the finals. Their captain had to deliver a KO, to do his part in catching up to the Sher-E-Punjab. Sandeep on the other end, had to play smart and avoid giving away those 6 points. Round begins with Sandeep throwing a wild overhand right, followed by a high kick to the body. Jason clinches and while Sandeep keeps landing those uppercuts and hooks. Jason attempts to take Sandeep to the ground but lands on his back, but quickly reverses and gets on the top. Jason smothers with his elbows and quickly takes the back to pull the rear naked choke. With 3 more mins in the round, Sandeep taps out. Delhi Heroes get the win, but at this point the celebrations mean nothing.

Won the Battle, Lost the War

Delhi Heroes are 6 points behind and a KO win would have got them to tie the scoreboard. Jamaine takes the center of the cage and stalks his opponent. Boaz throws a kick, gets caught by Jamaine who takes him down. Jamaine manages to secure the full mount and then takes his back. Heavy leather constantly lands on Boaz who was in all sorts of trouble. The referee has seen enough and steps in to stop the fight. Delhi Heroes finish the tournament with 12 points and had to settle for the 2nd place. 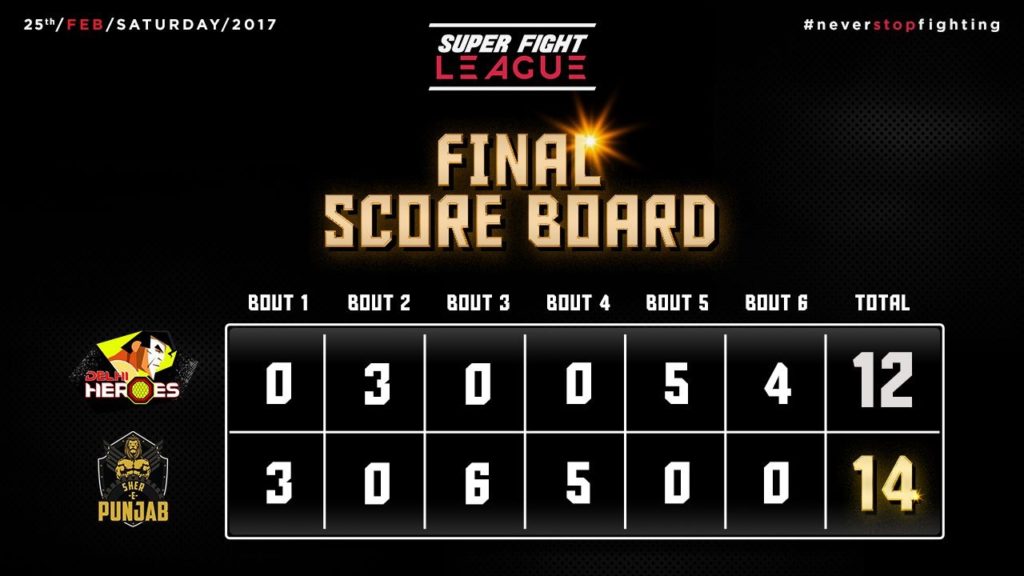