Smokin’ Jo Nattawut Focuses On the Task At Hand

Smokin’ Jo Nattawut has been looking forward to ONE: DREAMS OF GOLD on August 16 at the Impact Arena in Bangkok because that means he gets another shot at Giorgio “The Doctor” Petrosyan.

Nattawut has had more than enough time to prepare for his second meeting with Petrosyan since the latter’s quarterfinal match was ordered for a rematch. It gave the Thai native time to watch the highly-anticipated bout and see who he will face in the semifinal round of the ONE Featherweight Kickboxing World Grand Prix.

“That was really a good match between Petchmorakot and Petrosyan,” Nattawut said. 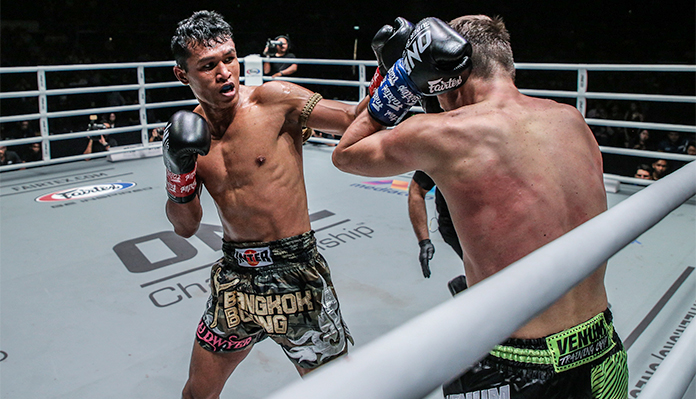 “In my opinion, Petchmorakot and Petrosyan did win their respective meetings. It was a really tough match to judge and I have really high respect for both of them.”

The 29-year-old first met Petrosyan at ONE: HEROES OF HONOR at the launch of ONE Super Series in Manila. They exchanged punches, kicks, and knees for three rounds, but it was the accuracy and speed of “The Doctor” that gave him the unanimous decision.

It has been over a year and both athletes have improved since that first encounter. Nattawut, however, saw some holes in his opponent’s style that he can take advantage of.

“He is patient in waiting for an opening before he releases those heavy punches, I know because I have fought him before. I also noticed that he recently gets easily tired when he competes, and that along with my kicks and knees will work to my advantage. I just simply need to do well in all aspects of the game to proceed to the finals.”

“I’m not thinking about the prize money or who I will be facing in the finals just yet,” Nattawut concluded.

“I just want to make sure that my focus and attention is on my preparations for Petrosyan. I’m taking it one step at a time. This match first then I can think about the rest when I’m there.”