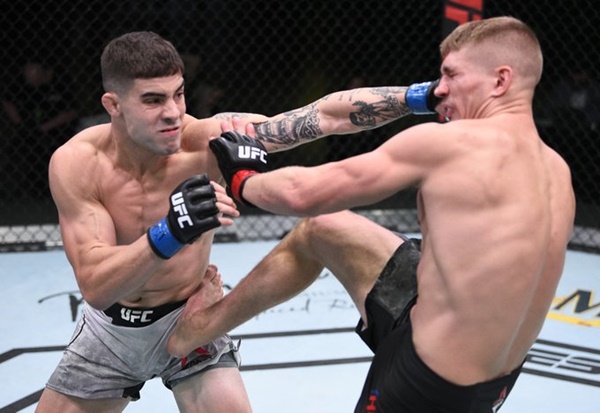 Both are known to be extremely well-rounded however have shown grappling as their relatively stronger pedigree. Due to many cancellations on the card, the fight even got bumped to the main card. Solecki, however, shined under the bright lights as he submitted Hubbard with a beautiful standing rear-naked choke in the first round. 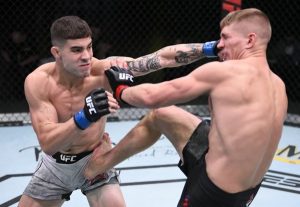 Stepping in as an underdog, the Contender Series graduate not only shocked the odd-makers but also ended up surprising himself as Hubbard was unable to be submitted in his previous fights even by ADCC (BJJ) medalist Davi Ramos and former Olympic wrestler Mark O. Madsen. (via BJPENN.com):

“Absolutely, I was surprised I got him out of there in the first. He is a tough, tough guy. Davi Ramos and Mark O. Madsen are ADCC medalists and Olympians and they couldn’t finish him,” he said to BJPENN.com. “I think it was the striking that made him check out a little bit. I got the better of the striking and he shot in and I think the striking is what set the choke up.”

‘Father to be’, Solecki said he was back into the gym, the next Monday after the fight as he expects an impressive first-round finish should open other good opportunities for him. He expects his next assignment to be as early as in December.

“It was amazing, especially with a child on the way. It was great getting to showcase what I can do as I have those first-round submissions on the regional scene,” he said. “I went from being a three-round grinder to now being the talk of the town.”

“I was back training the day after. I’m going to get ready for whatever they offer as long as my daughter is born first, I can’t miss the birth of my daughter,” Solecki explained. “I will take a quick turnaround if I need be but I asked for December.”