Stephen ‘Wonderboy’ Thompson ended his two-fight losing streak last Sunday at UFC 244 when he defeated the favourite Vincente Luque. This was a must-win fight for wonderboy, who was coming off of a brutal knockout loss to Anthony Pettis earlier this year.

Going into this fight, Luque was the betting favourite, but Wonderboy broke him down round by round and also landed heavier power shots throughout the fight. Thomspon ended up beating Luque via unanimous decision. 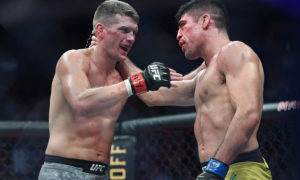 Wonderboy also ended up injuring his right hand in the second round, which ended up limiting his offensive ability for the remainder of the fight. Despite all this, he continued throwing his right, which proved to be beneficial as he comfortably cruised towards a UD victory.

Bollywood superstar Varun Dhawan also took to twitter and praised wonderboy for putting up such a terrific fight.

Wonderboy was quick to reply to Varun and thanked him.

Thank you my friend!!

He is now targetting Jorge Masvidal who he has already beaten back at UFC 217. During the post-fight interview, he joked that it would be great to fight him again and it would be “really cool” to see “the nicest guy versus the baddest guy”.

Do you guys want to see a rematch between Wonderboy Thompson and Jorge Masvidal?

Previous articleWatch: Darren Till says it’s ‘destiny’ that he will eventually fight Israel Adesanya
Next articleIsrael Adesanya says he is willing to fight Jon Jones at 185lbs