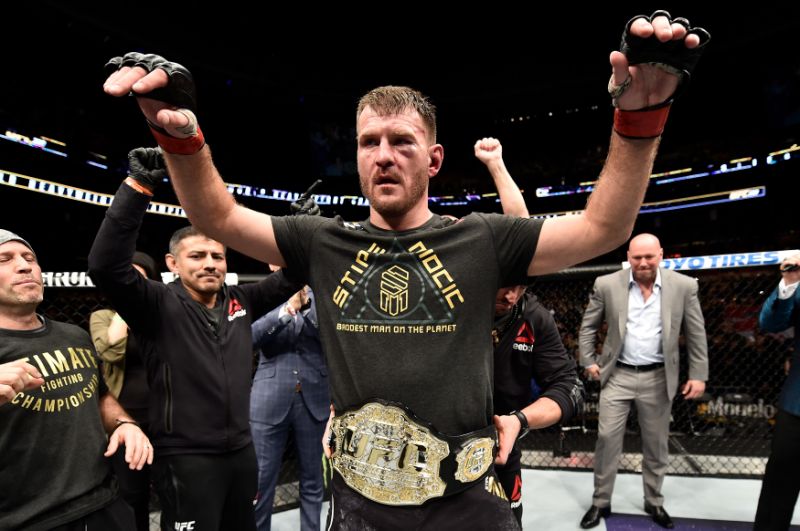 Stipe Miocic made history at UFC 220 by becoming the first heavyweight to defend the UFC
Heavyweight championship for three consecutive times. But despite the triumph, he felt disrespected as
his opponent Francis Ngannou was promoted excessively while he didn’t receive the same level of
promotion by the company.

During the post-fight ceremony of crowing the champion which is done by the UFC President Dana
White, Miocic simply took the belt from White’s hand instead of letting him put around the champion’s
waist. Miocic, immediately then handed over the belt to his coach who put it around his waist. The UFC
boss didn’t look much happy about it.

“(He’s) my dude,” Miocic explained his actions. “He respects me and I respect him. End of story”. He continued stating that he didn’t really care about how the UFC feels about him being their heavyweight king. But he is really delighted to be victorious and feels that he doesn’t need to overthink about the unfair treatment by the company.

“Where’s my coach at? Those dudes right there are my family. They all respect me and I respect them. They come with me. We go to war no matter what – win, lose or draw. That’s my family. We all respect each other no matter what the situation is,” he says as he explains his bond with his team who respect and support him always.

This won’t be the first time he has expressed his disappointment with his treatment in the hands of his
employer. Previously, he had expressed his frustration about his UFC 203 opponent Alistair Overeem
who has never won a UFC title, being paid more than him while he was fighting the Dutch in his
hometown of Cleveland where he is a star.

“Listen, I feel a little bit disrespected, but I’m not going to dwell on it,” Miocic said recently on The MMA Hour. “He’s got more hype on him I guess. The guy hits super hard. We’re making a big thing about it, I’ve fought some good guys, you know? That’s how we are. I’m not much of a trash talker I just like to fight, that’s what I do.”

Many UFC fighters in the past have voiced their opinion about the way UFC handles business. This
includes the likes of Anderson Silva, Georges St Pierre, Jon Jones and the list goes on. The UFC President Dana White is one of the shrewdest persons when it comes to doing business and gets the deal done his way most of the time. Now that Stipe Miocic has cemented his legacy as the ‘Baddest Man on the Planet’ the UFC will have no choice but to promote him the way he deserves to be promoted. Miocic is one of the finest representatives of the sport who has really good heart and character. From being a firefighter to being a MMA fighter he is always loved and respected in the MMA community.

Previous article
ONE CHAMPIONSHIP: King’s Of Courage Recap
Next article
Daniel Cormier talks about Ronda Rousey and the WWE