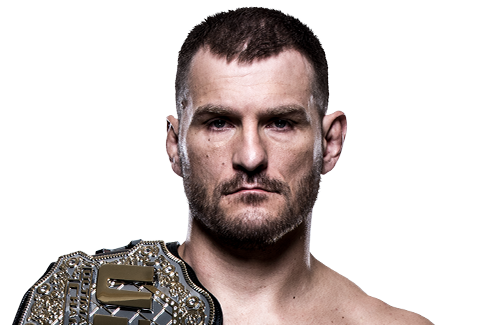 Shock-waves were sent into the entire MMA world when UFC president, Dana White posted a picture with former UFC heavyweight champion, Brock Lesnar. Lesnar wore a UFC t-shirt in the picture and thus, sudden speculations about his UFC return started. There has been even greater speculation about who Lesnar is going to face on his return to octagon. The UFC heavyweight champion Stipe Miocic’s wife, Ryan Marie Miocic had expressed her desire about how she wanted her husband to welcome Lesnar back into the octagon with a fight. However, things have been stagnant ever since and there have been no new updates about Lesnar’s return and a potential super fight with Miocic. Although, this hasn’t stopped Miocic to take a sly, subtle dig at the WWE Universal champion.

Miocic is currently “The Baddest Man on the Planet”. He recently made history by successfully defending his title for a record third consecutive time. This feat has made many fans and pundits alike to consider him the greatest heavyweight of all time.

Miocic’s next title defense is a super-fight against the UFC light heavyweight champion, Daniel Cormier at UFC 226.

​On the other hand, Lesnar is currently under contract with the WWE and is all set to defend his title at Wrestlemania 34 against Roman Reigns. Lesnar’s WWE contract will soon be running out and he has been procrastinating about signing a new deal with the promotion. If certain rumours are to be believed then Lesnar will drop his title to Reigns at Wrestlemania 34 and will then let his contract run out. His next destination is believed to be the UFC. He is a mega star and UFC President Dana White has always been keen to have him as a part of the roster.

On this week’s edition of Monday Night RAW, a rather interesting fan sign caught the eyes of a lot of cameras. During the segment between Lesnar and Reigns, a fan sitting in the front row had proudly hauled up a sign which said, “Lesnar fears Stipe”. The sign soon went viral and became the source of a lot of memes. However, in an interesting turn of events, Miocic seemed to take a dig on Lesnar as he retweeted the fan’s picture of him holding up the sign with Lesnar in the ring. “Stone Cold” Stipe retweeted the fans picture, he reiterated the quote, “Lesnar fears Stipe”, and claimed that his fans are the best.

My fans are awesome! pic.twitter.com/DnJJFPs9z4