Stipe Miocic vs. Junior dos Santos 2: A Battle of Fire and Ice

UFC and Dana White are currently in immense pressure to put out successful pay-per-views due to the change in ownership. The priorities are clearly set and the management is trying to make more commercially successful fights. This money minded approach has certainly been hurting some of the so called “boring” fighters such as the BJJ ace’s like Ronaldo Souza and Demian Maia. Whereas the more marketable fighters continue to reap its benefits.

The UFC are under pressure to produce successful and thrilling PPV’s. However, it’s safe to say that till now all three PPV’s of this year have phenomenally failed in tasting success. Thus, there is a lot of pressure on the UFC 211 fight card to amaze the fans and leave them fully satisfied. The UFC 211 fight card is stacked with spectacular match-ups between some great fighters with two title defenses serving as the headliners for the event. Though, on 14th of May all eyes will be on the main-event, as the most coveted title in mixed martial arts will be on the line.

About a year ago at UFC 198 Stipe Miocic turned the lights off for Fabricio Werdum with a spectacular single right hook to the face. Werdum was lying unconscious on the canvas, as the whole world finally realised and took notice of Miocic’s immense potential. While Miocic has surely earned his way to the top of the heavyweight mountain. The same can’t be said about the challenger. JDS was once “The Baddest Man on the Planet”, however he has fallen down the pecking order of the 265-pound elite. With a record of 2-2 in his last four fights and being inactive for more than a year, it can be successfully argued that the Brazilian’s push towards a title shot is a bit premature.

Nevertheless, the ATT ace can proudly claim himself to be the last man who defeated the current champion. After a rather uneventful and respectful build-up to their rematch, “The Silencer” faces ‘Cigano’ in a battle of behemoths at UFC 211. Let’s understand and analyse the techniques involved in this matchup of fire and ice. 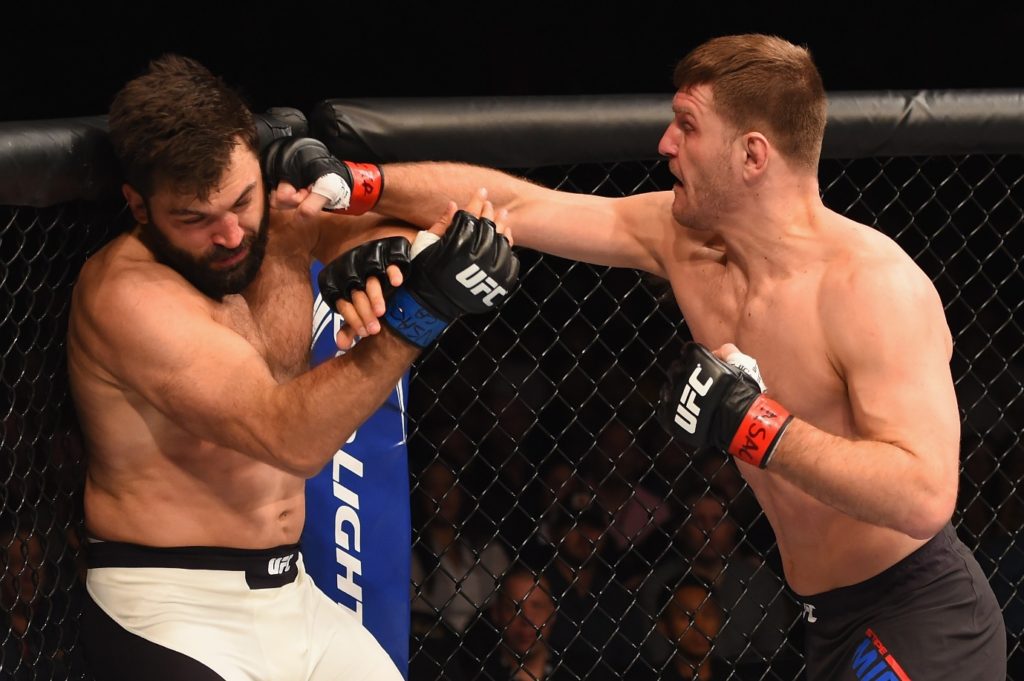 One of the champ’s former opponents Paul Barry once revealed that before their fight, he was told that Miocic had some amateur boxing experience. Unfortunately for Barry, he soon discovered that Miocic was a former Golden Gloves champion, thus claiming that he was once just an amateur boxer is a huge understatement. The champion’s standup skills, his boxing ability to be precise is ever improving. Such is his brilliance that he managed to outbox and out-strike a professional boxer turned MMA fighter Fabio Maldonado.

It’s often claimed that the most dangerous place to fight inside the octagon is inside an opponent’s “pocket”. The pocket is the distance between two fighters where a strike can be thrown without utilising the full reach. Once inside the pocket, both fighters are in reach to hit each other. It is the place where fans get to witness the most powerful hooks and the most brutal uppercuts. Most fighters in any division are of a similar height and reach. Thus, most fighters (sans daredevils like Diego Sanchez) do not fancy fighting in the pocket. However, Miocic absolutely cherishes fighting inside the pocket. His high intensity, in your face approach to fighting makes him a dangerous opponent for fighters who prefer fighting from the outside such as JDS.

The champion will most likely close the distance by maintaining continuous pressure and will slowly look to obliterate the Brazilian with digging hooks to the body. Miocic palpably won’t utilise elbows or knees but would rather hit Santos with short powerful punches and brutal low leg kicks.

If we take a closer look at the Brazilian counter-puncher’s standup know-how, we discover that he possesses two major advantages over the champ while striking:

Just like Miocic, Cigano too has a boxing base. He doesn’t have the same amateur boxing accolades as the champion but certainly holds more experience in trading punches. Throughout, his career he has proven to be a better and more technical striker both offensively and defensively than most fighters in the division.

To elaborate the second advantage, you’ve got to closely watch and observe JDS’ fights. Being smart with his boxing means that JDS is one of those visionary fighters who can easily deduce the movements of their opponents which in turn helps them to predict their attacks. This smart striking vision also allows JDS to program his opponents into making mistakes for him to capitalize on.

A very good example of this can be witnessed in his UFC debut against “Vai Cavallo”. During that bout, JDS hit Werdum with a few straight jabs which in turn led Werdum starting to level-change regularly. JDS instantly realised this and hit him with a weak uppercut by his left hand. This then programmed Werdum to level change away from the left hand. JDS them smartly baited the BJJ ace by pumping and feinting his left hand, seeing this Werdum level changed away from Cigano’s left hand and was caught by an incoming ferocious right-handed uppercut.

Another thing to consider in the striking department is the power that both these men possess. It’s difficult to say who’s got more knockout power. However, one thing which should be noted is that Miocic has been showing some signs of a fading chin in his recent fights, whereas JDS is seemingly still the owner of an iron chin. Thus, it’s still to be seen whether Miocic’s somewhat fading chin can handle the Brazilian’s big bombs or not.

Sensei Sangam says: Miocic’s aggressive stalking fighting approach will certainly work. However, he will have to be wary of JDS’ knockout power. After carefully examining every aspect of their striking game, I feel that Miocic holds the striking advantage. 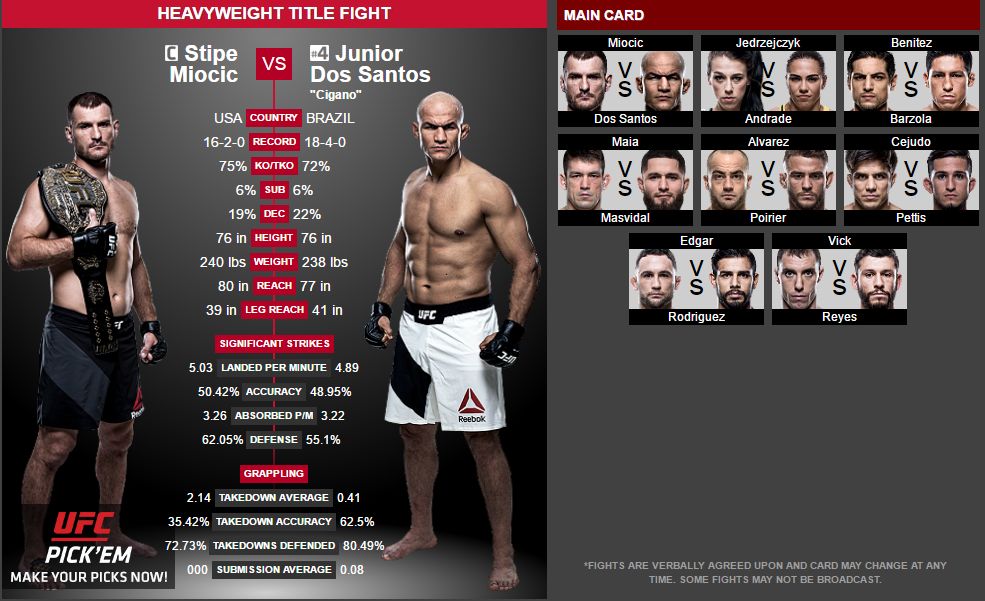 The champion will look to use his NCAA Division 1 collegiate wrestling background. In their previous meeting, the Cleveland native had adopted Cain Velasquez’s technique of defeating JDS. Velasquez’s method of beating JDS involved high-pressure striking, clinching and securing takedowns. However, JDS is a BJJ black-belt with a phenomenal takedown defense of 80.49%. Even a great wrestler like Cain failed to secure multiple takedowns against the Brazilian and so did Stipe. During their first bout, Stipe attempted 12 takedowns out of which he was only successful once.

The Champion has great wrestling pedigree and often shoots for single or double-leg takedowns. The proficiency of his takedowns is enhanced by his power, brutish strength and impeccable timing. However, JDS too is no slouch at grappling and defending takedowns. The BJJ black-belt proved in their first bout that he possesses all the answers to Miocic’s amateur wrestling background.

Dos Santos’ hardly uses his BJJ offensively with just 1 submission victory to his credit. Though, he is a master at utilising his BJJ defensively. His takedown defense percentage serves as an evidence for that. Every time he sprawls right and stuffs one of Miocic’s takedowns, it will tire out the champion and thus the takedowns after that will be much easier to defend against.

Sensei Sangam says: JDS would have certainly improved his wrestling and grappling skills even more since joining ATT. The champ might occasionally look to drag the fight to the ground but the challenger’s new-found ATT style BJJ should be enough to stop the takedowns. Thus, it might be a little surprising but I do feel that due to JDS sprawling well, he holds the advantage in grappling.

As we discussed earlier, Miocic cherishes closing the distance, whereas JDS prefers to maintain the distance and in utilising his reach. Thus, even when it comes to clinching, Miocic being the wrestler has a great appetite and zest for being in the clinch. On the other hand, the challenger usually strives to avoid the clinch. He has always seemingly faltered against fighters who forced him into a clinch battle. Cain Velasquez and Alistair Overeem forced him to fight from the clinch and got their hands raised at the end of their bouts against JDS. Miocic too tried to clinch with JDS in the first battle, though he tired himself out and didn’t have enough energy to successfully implement the clinching game plan.

As for the conditioning, it is certainly the biggest difference between both these fighters and might be a major factor in deciding the result of the bout. The Brazilian easily has the best conditioning in the division after Cain Velasquez. He has had two five round battles with “Sea-level Cain” which have helped his cardio and conditioning. While one of Miocic’s biggest achilles heel has been his cardio. His last three fights have all ended in the first round, thus his conditioning might fail him against JDS at UFC 211.

Final verdict on clinch and conditioning:

Sesnsei Sangam says: Stipe holds the advantage in clinch while JDS holds a massively lopsided advantage in cardio and conditioning.

This is one of the most enthralling match-ups stylistically. This fight surely won’t go to the ground as both fighters have enough confidence about their respective striking abilities and both would cherish to stand-and-trade fists.

Thus, fans should expect a classic barn-burner, brawl between two behemoths for the most prestigious title in mixed martial arts; and also for the honour of being called “The Baddest man on the planet”.

Thus, in this battle of ice and fire, I believe that Miocic’s high-pressure and clinch based fighting style will be too much for JDS to handle. Hence, I expect Stipe Miocic to successfully retain his title.