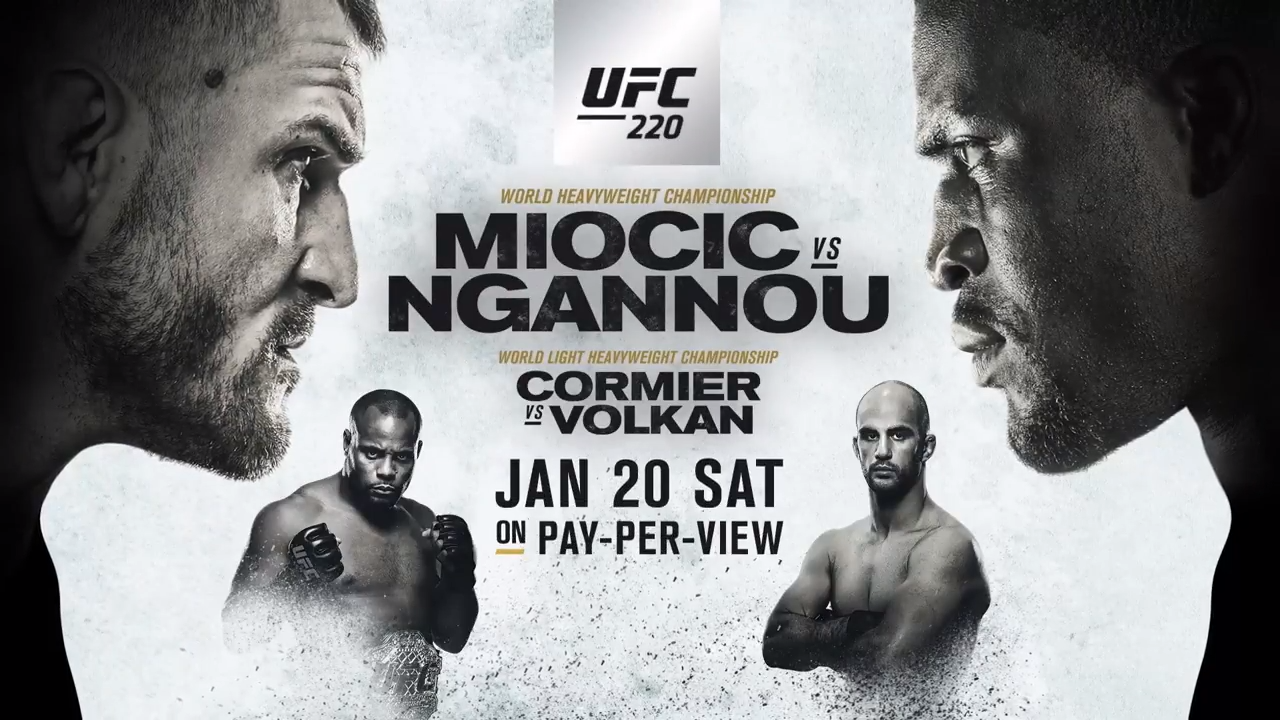 UFC 220 is this weekend, and for the first time in years, the title fight in the heavyweight division offers a mouth – watering clash. The narrative going into this fight is whether or not Francis Ngannou catches Miocic with that sledgehammer of a fist.

And the UFC Heavyweight Champion hasn’t taken those sentiments too kindly. Stipe accused the UFC officials of banking against him, and wanting Ngannou to beat the champion. However, it isn’t just the heavyweights that will be throwing down for the title.

With Jon Jones being sidelined yet again, Daniel Cormier welcomes a new challenger in Volkan Oezdemir. ‘No Time’ has been wrecking havoc in the light heavyweight division, dropping his opponents like flies. However, Cormier, who has taken punches from the likes of ‘Rumble’ Johnson won’t be fazed by the newest prospect in the 205 – pound division.

Before the fight however, we caught up with Miocic, Francis and Cormier, to talk about their upcoming fights.

Stipe Miocic isn’t concerned about Ngannou’s power, or what people think of him

While Miocic certainly isn’t impressed with UFC’s efforts to push Francis Ngannou as a monster, he understands Ngannou’s appeal. Moreover, the champion told us that he isn’t too concerned about Ngannou’s power.

“He’s a big guy and hits hard, just like any heavyweight”, Stipe told us. “The guy’s punch measure – I mean, I’ve never seen it, but I’m sure he hits hard. I think in the heavyweight division, everyone hits hard. So I’m definitely going to watch out for that, and I’m not going to get hit with anything I don’t want to get hit with, and I’m going to do my thing.”

The fans have certainly forgotten that Miocic himself has been on a tear recently, stopping his last three opponents in the first round. But Stipe was quick to explain that he did not care about the fans not remembering those wins.

“Honestly, I don’t care if they forgot about them, or if they don’t think about them. I really don’t care. The only thing I think about is January 20th, and walking out with my hand raised, which I will. I’m going to stay (the) champ, and I’m going to keep this record and keep winning.”

While the UFC Heavyweight Champion previously mentioned that he did not appreciate the UFC officials hyping Ngannou, he made sure to emphasise on the fact that he wasn’t going to go out to make a statement to the UFC.

“No, the end’s going to prove the point. So I really don’t care. He (Ngannou) is a great fighter, he’s super tough, and he has fought some good guys. But unfortunately he hasn’t faced anyone like me yet.” 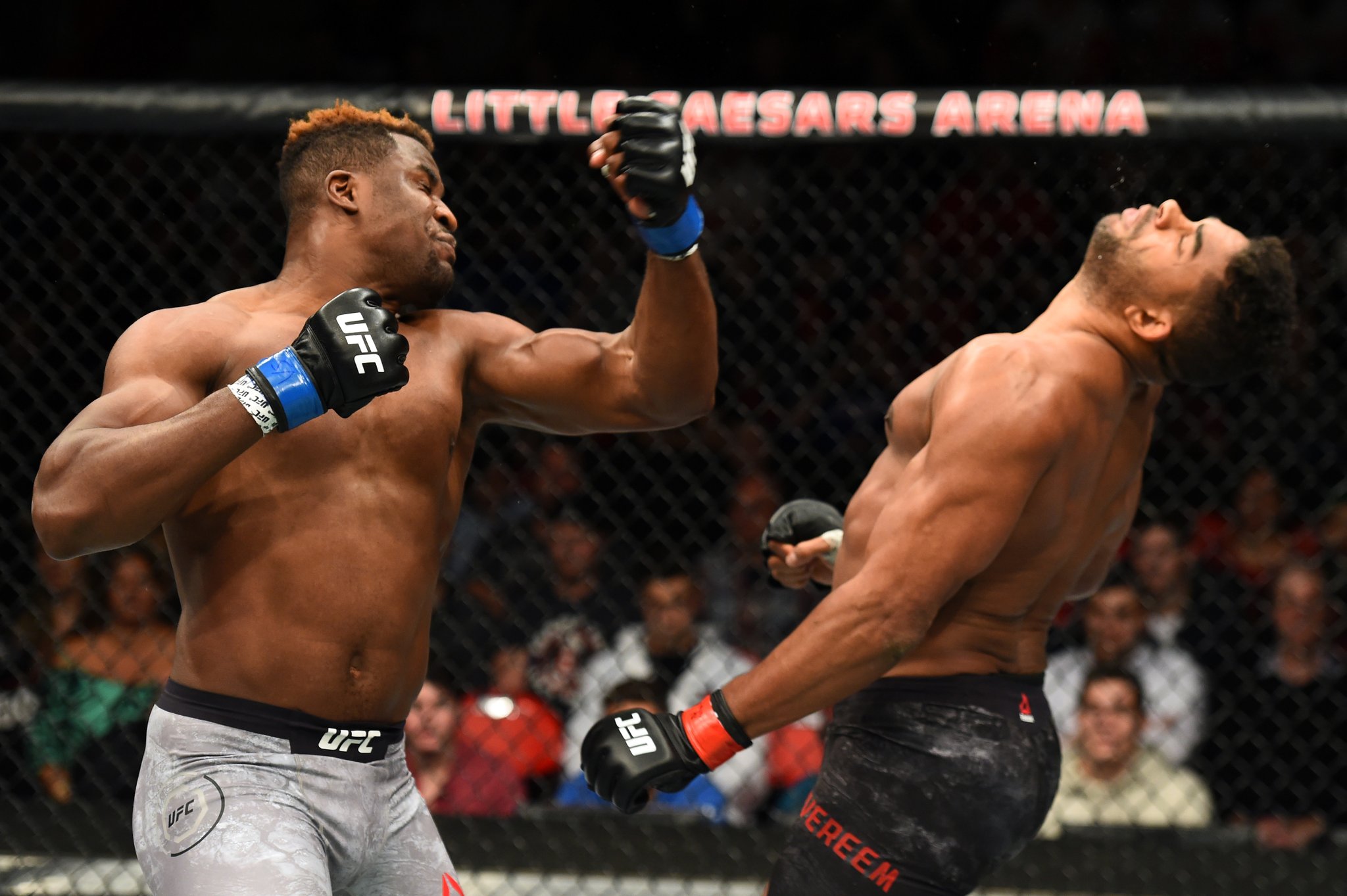 2017 was a fantastic year for Francis Ngannou. Not too long ago, Ngannou was forced to fight for his daily bread, but four years later, he now finds himself at the top of the world, fighting for a world title.

“My thought is the thought of a kid that always dreams about something, lives with it, and when he goes to sleep tonight, he keeps his dream next to him”, Ngannou said, while talking about how surreal the entire ordeal is for him. “Grows up with it, and today, he’s approaching the dream. He’s on his way to making the dream come true.

“It was more important (than what people think). It was very important that he was a strong (fighter), who was going to drive me to this fight. At that time, I had two opponents in my mind before getting the UFC (title shot). But now, I have only one. So it’s different.”

While the selling point of the fight has been the devastating knockout power that Ngannou possesses, many seem to forget the fact that Francis has four submission wins, asserting his dominance in the grappling department. However, the number one contender is in no hurry to prove his grappling chops to the masses.

“It doesn’t matter what people think. I’m an opportunistic guy, that’s what I’m saying. I’m always looking to take the first opportunity that my opponent gives me. So I’m not there to do demonstration to show how I can grapple, how I can wrestle. I’m there to win the fight, and it doesn’t matter where the fight goes, I’m going to win. So, I can bet – I keep training in MMA to be a complete fighter, so I don’t care about what people think.

It isn’t just the heavyweight clash that will send the sparks flying. Volkan Oezdemir has the ‘touch of death’, sending his opponents crashing to the mat with just one punch. The UFC Light Heavyweight Champion, Daniel Cormier however wants to put his demons to rest with a dominant victory over Volkan – especially to erase the memories of his loss to Jon Jones.

“Yeah. I mean, my career is so closely tied to those fights, that I do need to win in dominant fashion”, Cormier enthused. “More so this time because of what happened in the last fight, but my goal is to always to go out and dominate, and that’s what I’ve done for the vast majority of my career. So nothing’s really changed. The only pressure comes from what I’m putting on myself because of the way the last fight ended.”

Daniel also dwelled on the appeal of the power punchers, and said that he understood why the fans love watching them inside the cage.

“I think people fall in love with power punchers. I believe it’s just, because they’re fighting, right? They finish the fight. They finish fights in ‘No Time’. You could keep the fighting going, and all of a sudden it’s over. You got guys like Rumble, that was just knocking everybody out. You got guys like Volkan, and they just knock everybody out. So you fall in love with them.

But they… it’s not just about punching hard. This game is much more. It’s about what you have up top, mentally, all around mixed martial arts game, experience. I always say whether I’m at the commentary booth, hosting or something, or just on these calls – there are levels to this game. And when a person isn’t on the level, he gets exposed very quickly. And I think Volkan’s a fantastic fighter.

The other major talking point going into the fight has been Jeff Novitzky’s comments about Jon Jones. The VP of Athlete Health and Performance opined that Jon might return sooner than expected, and when asked if that was on his mind going into the fight week, DC refuted the possibility of Jones diverting his attention from the task at hand.

“No, I don’t really worry too much about anything but the person in front of me. Volkan Oezdemir, I respect enough to focus on him entirely. I respect him enough to focus entirely on him, and (let) him be my obsession. I’m obsessed with this young man right now, obsessed with coming up with a game plan and the fight strategy to go out there and beat him convincingly. So, yeah, I don’t worry too much about Jones right now.

He’s ineligible, as he was for the last couple of years before the last fight.”