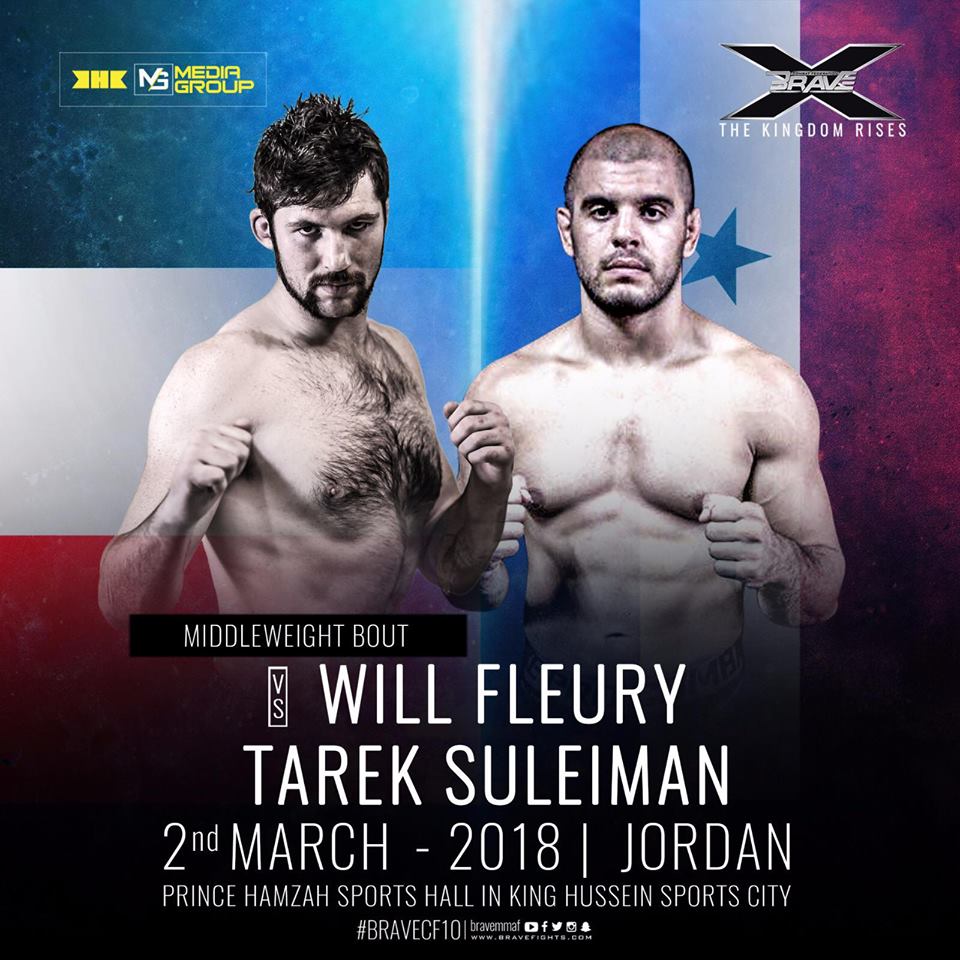 Middleweight Tarek Suleiman will make his much-awaited Brave Combat Federation debut at Brave 10: The Kingdom Rises, set for Amman, Jordan, on March 2nd. And the Syrian standout is looking forward to going back to the country in which he made his mixed martial arts debut, back in 2012. Six years on, Suleiman hopes for more fireworks from the local fans and vows to “expose” his opponent, rising star Will Fleury.
The Tiger Muay Thai product spoke of his excitement at reconnecting with the Jordanian fans and his expectations for his promotional debut, explaining his happiness at having signed with Brave.
“Jordan has been amazing to me. I did start my professional MMA career there and I can’t even describe the support I have received from the Jordanian fans. I have a lot of followers from Jordan and they have proven many times they are the best fan base for Arabic MMA fighters. I can’t wait to finally make my Brave debut in front of them. I’m happy to be in such a professional promotion. I have seen the level of professionalism from the Brave staff and I expect them to be worldwide leaders in MMA soon”, claims Suleiman.
While he’s excited to make his debut, the Syrian Middleweight will face an undefeated fighter in his first Brave outing: Irish prospect Will Fleury, who has three wins in three fights. However, Suleiman isn’t impressed with Fleury and says he’s going to be “smashed” at Brave 10.
“I have seen his fights and he’s nothing special. Fleury has a lot of gaps in his game. I will expose those gaps and I will show you guys that he is nothing special. I don’t train differently for him, I’m still training the same like I always did. I’m always working on all aspects of the game and the most important thing is improving overall. I’m going to smash him and I’m looking forward to receiving a bounce for his head”, guarantees the Syrian.
Brave 10: The Kingdom Rises marks the promotion’s first show in Jordan, home to some of Brave’s most decorated fighters, and the seventh country to host a Brave Combat Federation event, after Bahrain, Brazil, the United Arab Emirates, India, Kazakhstan, and Mexico.
Brave 10 Full Fight Card:
Featherweight title bout: Jakub Kowalewicz (Poland) vs Elias “Smile” Boudegzdame (Algeria)
Welterweight bout: Jarrah Al Selawe (Jordan) vs David Bear (France)
Lightweight bout: Charlie Leary (UK) vs “The Pride of Palestine” Abdul Kareem Al Selwady (Jordan)
Welterweight bout: Mohammad “The Latest” Fakhreddine (Lebanon) vs Tahar “Fast Hands” Hadbi (France)
Welterweight bout: Pawel Kielek (Poland) vs Tyler Hill (USA)
Bantamweight bout: Felipe Efrain (Brazil) vs Frans Mlambo (Ireland)
Featherweight bout: Dylan “The Nuke” Tuke (Ireland) vs Sodiq “Super” Yusuff (USA)
Bantamweight bout: Jalal Al Daaja (Jordan) vs Crisanto Pitpitunge (Philippines)
Catchweight bout (74kg): Mohammad “The Killer” Ghorabi (Lebanon) vs Gadzhimusa “Deadshot” Gaziev (Russia)
Middleweight bout: Tarek Suleiman (Syria) vs Will Fleury (Ireland)
Bantamweight bout: Nawras “The Honey Badger” Abzakh (Jordan) vs Abdul Hussein (Finland)
Middleweight bout: Chad “Superman” Hanekom (South Africa) vs Ikram Aliskerov (Russia)

Previous articleUFC/Boxing: Conor McGregor claims Floyd Mayweather has pulled out of rematch negotiations
Next articleMMA Roundup: Who said what? (2/20/2018)