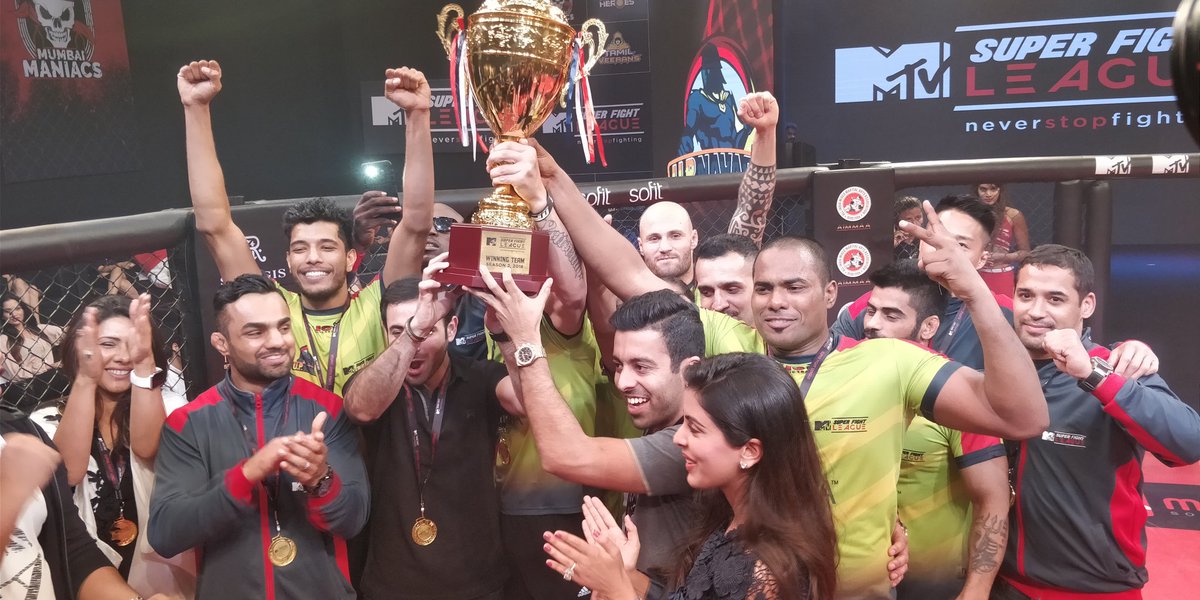 The final of Super Fight League 2018 went down between UP Nawabs and Delhi Heroes today in Mumbai.

Nawabs get the right start

UP Nawabs were off to a flyer thanks to Angad Bisht. Angad, who had to step in for the injured captain Gurdarshan Mangat, picked up from where he left off in his last fight. Angad managed to get a huge victory over veteran Swapnil Barve via a kneebar. The win gave the Nawabs a much-needed boost early on.

UP’s knockout artist Sumeet Khade went up against the controversial Vikas Dahiya in the second fight. While most of the fans expected another quick KO from Sumeet, it was a different story altogether.

Both men had their moments in the fight as it went all three rounds. In the end, the judges ruled in favor of Sumeet and this made it two out of two for Nawabs in the night.

The momentum of the Nawabs was derailed in the third match. Jennifer got a quick rear naked choke win for Delhi against Kiran Singh and earned the team’s first points. Delhi was still lagging behind in the scoreline and needed wins desperately.

Suraj Bahadur did just that when he got a unanimous decision victory against Jacky Gahlot. This was Gahlot’s first match of the season and a strong performance from Suraj ensured that Delhi was back on the right track.

Suraj’s win took the score to 8-8 with two fights to go in the night.

The climax of the season

Christian Jugwart faced Abhishek Rana in the fifth fight. The stakes were high for the fight and it was Jugwart that came out on top. Rana failed to come out for the second round and Jugwart was handed the win due to forfeit. The win once again put UP Nawabs on the driving seat and both teams had everything to fight for in the last match.

Below are the complete results from the final:

Previous article
UFC: Tony Ferguson is conditioning his elbows for the Khabib Nurmagomedov fight
Next article
UFC:Darren Till calls out Jorge Masvidal for a fight in May at UFC Liverpool