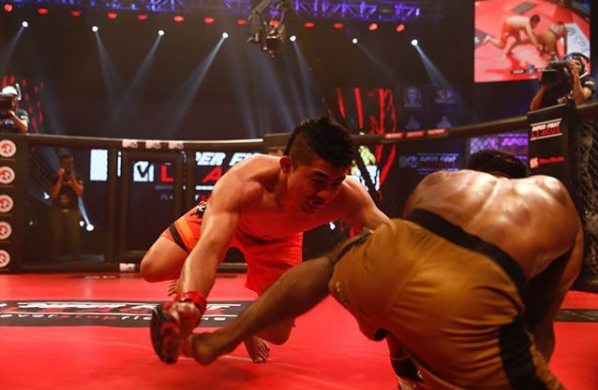 This week’s Super Fight League action started off with a do-or-die matchup between Sher-E-Punjab and Haryana Sultans. Both the teams needed a win to progress to the next stage and the stakes were high.

Punjab gets the right start

An exciting Bantamweight fight between Kantharaj Agasa and Roshan Mainam was the first offering of the night. Agasa, who is still undefeated in his professional career, was hands down the biggest challenge for Roshan till date. Despite being the underdog, Roshan came out with a good tactic which was working in the first round.

Agasa was brimming with confidence and went for a finish whenever he got a chance. Roshan’s perfect replies to Agasa’s questions ensured an excellent contest between the two. It was a similar story in the second round as Roshan was patiently waiting for an opportunity to strike back while Agasa piled up the pressure. The pressure game from Agasa paid dividends later on as Roshan was visibly tiring as the fight headed into the third round.

Agasa then took home the win via a unanimous decision and gave Sher-E-Punjab a three-point lead.

Nikhil Bhatt vs. Amit Kumar followed and delivered an equally contested first round. A cautious approach from both fighters unraveled in the second and rounds with occasional bursts of action. When the judges came up with their decision, it was in favor of Nikhil Bhatt. The win improved Punjab’s lead to six points with four fights to go.

Maiara Santos then reduced the points deficit of Haryana when she made quick work of Suman. Santos earned a first-round TKO win via ground and pound and held nothing back while celebrating the win.

In a turn of events, Haryana then took a two-point lead thanks to the first round TKO win that Farhad Hazaratzada picked up against Manoj Antil. The fight was a one-sided affair and it took the points standing to 8-6.

Haryana captain Ravindra Balhara then tried to take his team closer towards the semi-final spot when faced Afghani fighter Nasrat. It seemed like yet another mismatch as Ravindra seemed too much to handle for Nasrat early on but a huge shot from Nasrat at the end of the first round slowed down Ravindra. The Indian came out swinging in the second round but the aggressiveness worked against him as he landed an illegal knee halfway through the second round. This, in turn, gave a disqualification win for Nasrat and six points to Punjab.

Haryana’s comeback, however, was completed when Vinicius Mamute finished the debutant Sachin in the first round. Mamute went for the kill early on and submitted his opponent to an arm-bar after a minute into the first round.

The win booked the semi-final spot for Haryana Sultans with a point’s tally of 13-12.

Below are the results of the match.

Previous articleUFC: Cris Cyborg’s UFC 222 open workouts interrupted by mysterious man in a mask
Next articleUFC: Bryan Caraway gets a light-hearted roast on Twitter ahead of his fight in the weekend