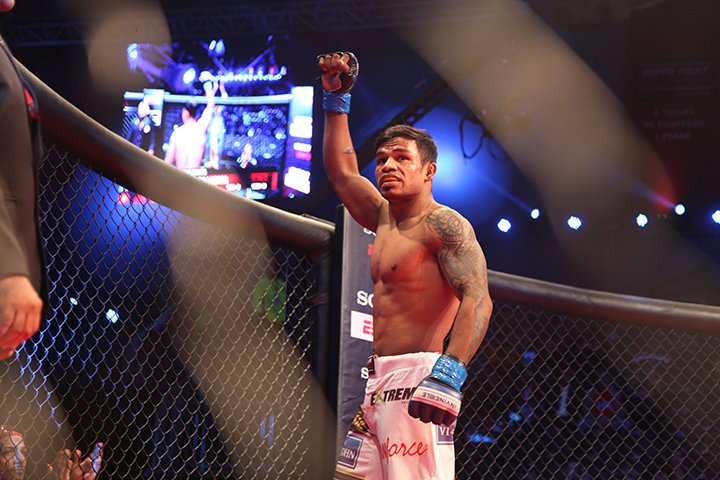 The second season of the Super Fight League opened with a high profile showdown between Sher-E-Punjab and Mumbai Maniacs.

The first fight of the season saw Kantharaj Agasa and Ateet Kelvin Gupta going head to head in a Bantamweight affair. Agasa was coming into the fight on the back of a six-fight winning streak whereas Ateet had won the BOOM MMA Bantamweight title in his last fight.

With all the stats and facts, it had a blockbuster written all over it but the fight proved to be a one-sided affair as Agasa dominated from the start itself.

Agasa and Nikhil give Punjab the lead

Although Ateet showed some heart to stay in the fight, Agasa systematically picked apart his opponent and finished the fight with an armbar submission. With the win, Agasa improved his record to 7-0 and gave Punjab a five-point lead in the match.

Punjab’s Nikhil Bhatt then improved the lead of Punjab to 11 points when he picked up a TKO win over Shankar Mehra in the first round. The weight difference between the fighters was glaring just like the case with the first fight. Both Nikhil and Agasa were five kilograms heavier than their respective opponents.

Mumbai Maniacs get back into the game

The third fight of the night saw Sarah Frota and Tatiane lock horns. Both fighters had their moments in the first round with Tatiane ending the round strongly with a couple of submission attempts. But Sarah produced a great comeback in the second and finished Tatiane via a triangle choke.

Sam Patterson then gave another boost to the Mumbai Maniacs when he stopped debutant Rajbeer Mehra with some vicious ground and pound. The result leveled the points to 11-11 and added more excitement to the last two fights.

The penultimate fight between Seth Rosario and Ravindra Singh also had a huge weight gap as Ravindra weighed in at 84 KGs whereas the veteran Rosario was at 77 KGs. Despite the weight difference, Rosario banked on his experience to choke out Ravindra in the first round itself. Rosario’s win took the match away from Mumbai with one more fight to go as the points went up to 16-9.

Mandeep Singh then wrapped up the match in style for Sher – E – Punjab by delivering a solid performance against Ashish Ahlawat. In what seemed like a sloppy fight, Mandeep had some great opportunities to finish the fight early on but it was only in the second round that he got a submission finish via armbar.

The final score stood at 21-9 in favor of Sher – E – Punjab and gave the defending champions a great start to the second season. Below are the complete results.