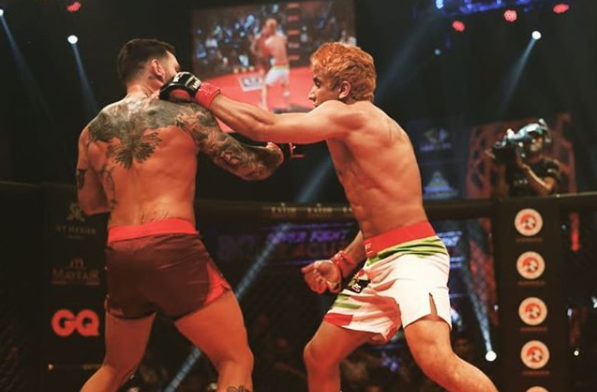 Delhi Heroes and Gujarat Warriors were in action today in the Super Fight League. Just like the case with yesterday’s showdown between Sher-E-Punjab and Haryana Sultans, it was a must-win scenario for both Delhi and Gujarat tonight.

The first blood was drawn by Gujarat when Kuldeep Shekhon stopped Pushpender in the first round itself. Kuldeep’s win gave Gujarat an early four-point lead in the matchup.

Momentum swings in favor of Delhi

Vince Murdock vs. Vikas Dahiya was the second fight of the night. Both men remained patient and technical throughout the first round. The pace slowly picked up in the second but soon, controversy unfolded. The referee stopped the fight midway through the round after what seemed like a groin kick from Dahiya. Murdock, who seemed unhappy with the whole debacle, climbed out of the cage and walked out. This, in turn, made the referee give the fight in favor of Dahiya.

Despite the controversial nature, the win got Delhi four points and leveled the game. Things then steered in favor of Delhi thanks to Jennifer. She was on top of Simran from the opening bell and showed off her BJJ skills before submitting Simran in the first round itself. Abdul Badakhshi then picked up where Jennifer left off by knocking out Manas Daimatry just seconds into the first round. The dominant performance from Badakhshi took the score to 15-4 and made it a tough hill to climb for Gujarat.

The odds were stacked against Gujarat when captain Bhabajit entered the cage to face Suraj Bahadur. After a scramble that lasted three minutes, Bhabajit managed to get the top position from where he finished Suraj with ground and pound. The four points that came from the win took the standings to 15-8.

Gujarat stood no chance of staging a comeback heading into the last fight as the point difference was too much to cover. Delhi then killed the game in style when Marcos finished Sumit Rangi a vicious arm-bar. Although Sumit landed a big shot early on, once the fight went to the ground, it was game over for Gujarat.

The final points tally stood 20-8 in favor of Delhi. Below are the results from the event.