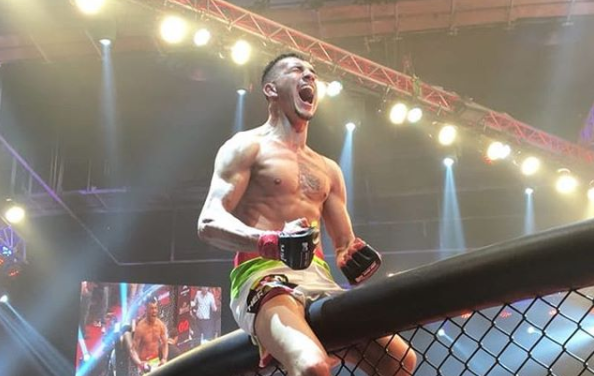 The opening fight of the night went down between Dhruv Chaudhary and Sanjeet Budhwar. Dhruv, who was undefeated throughout this season, was the clear favorite. But Sanjeet produced a shocking stoppage to give Delhi a five-point lead.

Confusion unfolded in the second fight between Vikas Singh and Vikas Dahiya. An accidental groin kick from Vikas Dahiya made the referee to rule the fight as a no-contest. As a result, both the teams weren’t given any points for the fight.

The Women’s Flyweight fight improved Delhi’s lead to 10 points as Jennifer submitted Preeti Shah with an armbar. The match further slipped away from the hands of Bengaluru when Abdul Azim Badakhshi produced the KO of the season.

The Afghani fighter knocked out Sascha Sharma with a flying knee in the third and ensured that his undefeated record this season was intact. The KO win gave Delhi another six points and took their lead to a whopping 16 points. This was also Badakshi’s sixth-straight stoppage win.

With a win out of question, the Bengaluru fighters produced some resistance in the last two fights. David Duarte stopped Suraj Bahadur in the first round via a TKO when Jose Santos submitted Maiwant Timori in the first. These two wins helped Bengaluru earn four and five points respectively. The final points tally stood at 16-9 in favor of Delhi.

Delhi will now face the winner of UP Nawabs vs. Haryana Sultans showdown which is scheduled to take place on Sunday night.

Below are the complete results from the event: