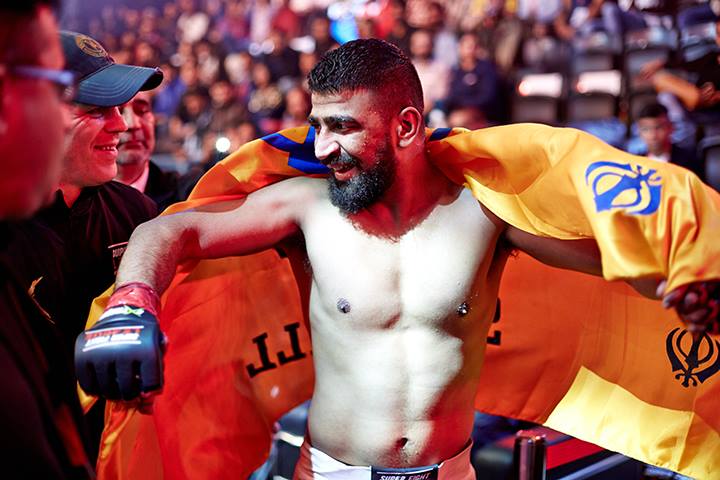 The first fight of the night was between Kapil and Rohit, with Kapil being the more seasoned veteran. Going into the fight, Kapil was known for his vicious submission game, while Rohit looked to use his striking to get the victory. Both the fighters felt each other out, before Kapil countered a high kick attempt by Rohit, taking him to the ground, and locked in the knee bar as Rohit tapped out!

Winner in 0:50 seconds of round 1 via submission: Kapil Kumar

With Mumbai securing a victory in the first fight, the stage was set for Gurdeep to make it two wins in a row, as he faced the German Hasny. Gurdeep was making his professional debut, while Hasny had over 10 fights in his professional career. Gurdeep used his effective wrestling to ground his opponent, as both the fighters went the distance.

In the end, Gurdeep proved to be too hot to handle for the German, as Shergill won the fight via unanimous decision. This gave Mumbai an 8 point cushion going into the third fight of the night, in what was a must – win night for the Maniacs.

The women’s flyweight fight saw Veni, who replaced Manjit Kolekar fight Deepika Singh. Deepika was considerably bigger coming into the fight, and was at least one weight class above Veni. Veni came charging in, and ate a head kick, sending her crashing to the mat as Deepika won the fight in just 10 seconds!

Winner in 0:10 seconds of round 1 via knock out: Deepika Singh

The quick win brought Bengaluru right back into the thick of things, reducing the point difference to merely two points after three fights.

With Sascha being the better grappler, the German immediately took Mora down to the ground, and proceeded to work on him for the major part of 15 minutes. Sharma tried to trap Mora in various submission attempts, but Mora managed to hang on, as Sharma picked up the unanimous decision victory, putting his team in the driver’s seat.

Mumbai trailed Bengaluru by one point, and needed to get big victories in the last two fights to have any hope of qualifying for the semi finals.

Both the fighters were from Wushu background, and tried to feel each other in the early going. Both started tentatively with leg kicks, and the action stalled for a while, with neither fighter doing much to get control of the fight. Petkar then initiated a takedown, and ended the first round in a dominant position, but didn’t do enough to seal the victory.

In the second round, Petkar locked in the triangle choke early, and managed to submit Kumar in just over a minute in the round.

Winner in 1:17 seconds of round 2 via submission: Abhijeet Petkar

Aryan tried to use his movement to confuse Brent, but Brent immediately took Aryan down with a double leg, and transitioned to side control. Brent then ended up on top of Aryan, and tried to go for an Americana, but ended up locking Aryan in an arm bar, as Aryan tapped out.

Winner in 1:46 seconds of round 1 via submission: Brent Ockerman

Mumbai kept their hopes alive with the victory, as everything comes down to the fight between Gujarat and Goa to see who goes through to the semi finals.