Super Fight League: UP Nawabs cruises into the finals at the expense of Haryana Sultans 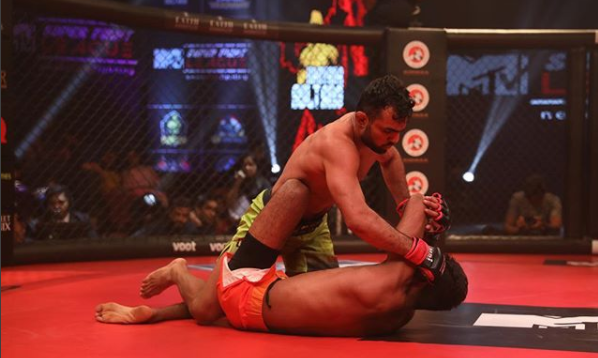 The second semi-final of 2018 Super Fight League between UP Nawabs and Haryana Sultans went down in Mumbai tonight.

Nawabs off to a good start

UP Nawabs enjoyed a flying start to the night thanks to Gurdarshan Mangat who secured a win against Dipesh Rasal. Dipesh had his moments early in the first round but Mangat soon made use of his experience to get the upper hand. Mangat spent most of the first round on top of the debutant and opened the second round with the same strategy. The Nawabs captain then broke Dipesh systematically with his superior ground game before the referee called for a stoppage in the third round. Gary’s win earned the team a four-point lead.

Sumeet Khade then made it two out of two for UP Nawabs by knocking out Pawan Goyat in the first round. The leg kick KO from Sumeet was something that belonged to the highlight reel. The win improved the lead of Nawabs to 10 points with four more fights to go.

Haryana got their first win of the night thanks to Maiara Dos Santos as she managed to get the better of Kiran. Maiara locked in the arm-bar just minutes into the first round but Kiran showed great heart to stay in the fight. Things then turned nasty as Kiran landed some illegal kicks to the head of Maiara. The outrageous move from Kiran forced the referee to stop the fight and announce Maiara as the winner.

Fight of the Night

The showdown between Farhad Hazaratzada and David Moon was hands down one of the most competitive fights of the night while it lasted. The intensity and the pace of the fight were sky high from the start itself. An accidental groin kick from Farhad then slowed things down. Moon utilized the whole five minutes to recover and earned respect from everyone when he decided to continue fighting. Farhad then got two points taken from him later on in the first round due to an illegal kick. The fighters constantly chased for a finish in the second round with neither of them finding any success.

Moon almost slept Farhad with a spinning back elbow in the third only to see Farhad recover just seconds later. In the end, it was Moon that went home with a unanimous decision win.

The fight then slipped away from Haryana Sultans when Abdul Sami submitted Ravindra Balhara. Sami had a dominant start but Balhara hung in the fight before Sami finally finished things off with a first-round triangle submission.

Vinicius Mamute vs. Jason Radcliffe was the last fight of the night. Vinicius was bloodied a couple of minutes into the first round but bounced backed strongly to submit Radcliffe with an arm triangle.  The win was nothing more than a consolation for Haryana who already lost the battle earlier.

The final score of the match was 18-11 in favor of UP Nawabs. Below are the complete results of the fight night.

One Championship Visions of Victory : Results