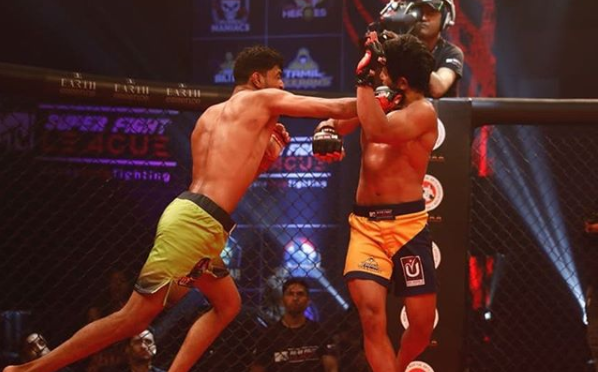 The last matchup of this week’s Super Fight League went down between UP Nawabs and Tamil Veerans. The Nawabs already had a guaranteed spot in the semi-finals and for them, this match was about making a statement. As for the Veerans, they had nothing but pride to fight for.

In the opening bout of the night, Gurdarshan Mangat produced yet another dominant performance. He went up against former BOOM MMA fighter Syed Imran in a bantamweight showdown and secured a TKO win in the first round itself.

A featherweight contest between Sumeet Khade and Krishnan Rawat followed. Sumeet was making his return to the Super Fight League in the fight and was eager to bounce back from the disappointment in his last outing. He did just that when he stopped Krishnan Rawat in the second round. The win made it two out of two wins for UP Nawabs and piled up the pressure on Tamil Veerans to deliver.

The women’s Flyweight fight between Kiran and Lise Knudson went the distance much to the surprise of everyone. Both fighters had their moments throughout the fight and there were some awkward moments as well. In the end, the judges ruled in favor of Kiran who got a unanimous decision win to add to her resume. The win further improved the points tally for UP Nawabs.

Ranjith Baria then made the night go from bad to worse for Tamil Veerans when he stopped Kundan Thakur in the first round. With two fights to go, the Nawabs confirmed victory and Veerans had nothing to fight for. However, the Nawabs were far from being done.

In the fifth fight of the night, Pawan Maan got a stoppage win over Manoj Kadian. Manoj had a good start to the fight but in the second round, Pawan managed to get on top and finished the fight through ground and pound. After the fight, Pawan called out Jason Ramesh Solomon and petitioned for a rematch against Jason no matter how much time it took.

Amit Sawant vs. Javed Mulla was the last fight of the night and the result was once again in favor of the Nawabs. Mulla earned a first-round TKO win and made sure that the entry of Nawabs into the semi-finals was on a dominant note.

Below are the results of the fight night:

Previous articleWWE/UFC: WWE and UFC in a battle to secure a deal with FOX
Next articleUFC: Joe Rogan makes fun of Adalaide Byrd at UFC 222