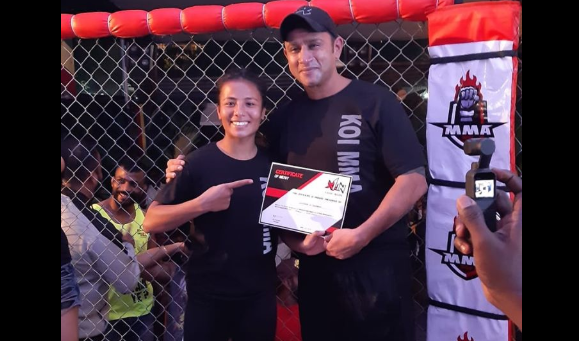 One of the major success stories in Indian MMA is that of the Bengaluru based KOI Combat Academy and its brilliant founder and head coach Mr. Vishal Seigell. From coaching the likes of Kantharaj Agasa and Roshan Mainam Luwang to selflessly starting a training program in which he provides accommodation, food and everything else from his own pocket for talented young MMA fighters who cannot afford it, Seigell has been an inspiration.

Though, recently one of Sensei Seigell’s students has been gaining the limelight and all the praise that comes with it. KOI Combat Academy’s Surbala Devi Laishram is an extremely polite and soft-spoken lady, but do not let that deceive you.

Because when she gets locked inside an MMA cage, she channels her inner deadly Warrior Princess to conquer her opponents. 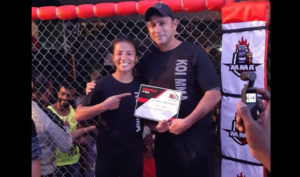 Surbala is still a new name in the sport and with an amateur record of 5-2 has a long and bright future ahead. However, even in her young career, she has already faced and conquered a lot of adversity such as a career-threatening injury. Not one to back down because of setbacks, Surbala in a recent interview alongside her coach Vishal Seigell told us that she wants to someday become a world champion.

Surbala and Coach Seigell told us that they are safe and sound during this pandemic in Bengaluru. They also emphasized that they are following all the lockdown restrictions and protocols.

Surbala: I am completely safe and sound in this lockdown. I am currently staying here at my Coach’s house in Bangalore.

Coach Seigell: We have been carefully following all the protocols and that has helped us stay safe in this quarantine and this time of a global pandemic.

Surbala revealed that since she is nursing a knee injury. She has been focusing on physio training, “In the morning, I do my physiotherapy routines. After that, I just cook some nice food and then in the evening I train again. Usually, the evening workouts are light training sessions with Coach Vishal. Since I have recently had knee surgery, that has completely changed my way of training. So, I am training to get my flexibility back in that knee.”

“Back when I last fought in Baharain at World MMA Championships, I injured my knee in the first round of my fight against Daniela Hernandez. In that, I injured my ACL, MCL and Meniscus,” Surbala revealed about her career-threatening knee injury.

Coach Seigell then provided a lot more insight into The Warrior Princess’ knee surgery. “She had ACL and MCL reconstruction and meniscus repair on the right knee. Because she is only 22 and her entire career is still left to pursue, so they took the patella tendon, instead of taking muscle from where they usually do, which is the hamstring. But because MMA is such an intense and physically taxing sport, so taking muscle from her hamstring would not have worked well. So they used the patella tendon and attached it with bio-absorbable screws. The surgery happened in January and a week after that her physiotherapy began.”

Surbala then shed more light on her background and how she got into MMA, “My background is in Taekwondo. In 2010 I did Taekwondo training with Coach Saikhom Jackychan for 3 months and then took a gap for 4 years because my parents wanted me to concentrate on studies. In 2014 I restarted martial arts with WAKO Kickboxing under Coach Umakanta Sarungbam of kickboxing association of Manipur (KAM). He motivated and supported me a lot. I competed in multiple state-level Kickboxing Championship and I was an 11time national gold medalist in Kickboxing and I competed four times in International Championship I won one bronze medal, 2 gold medals and won World K-1 Title Belt in strawweight division in 2018 in Kickboxing in four different international competitions.”

Previous articleRitu Phogat: The new face of Indian MMA
Next articleJon Jones reveals why he stepped in to stop vandals and protesters in Albuquerque