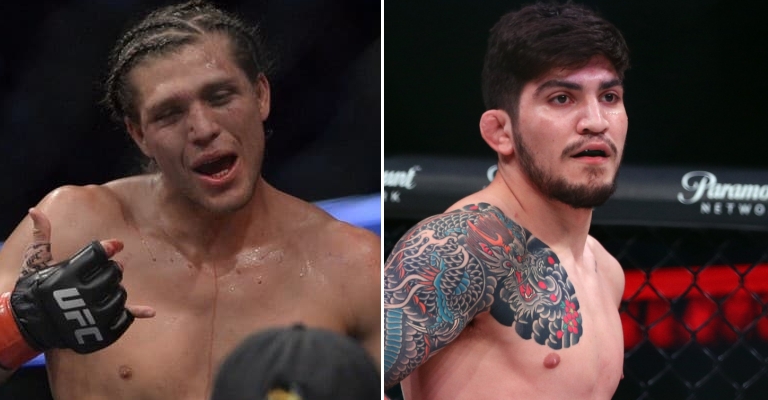 Dillon Danis is making headlines around the world after he was involved in a post-fight brawl with Khabib Nurmagomedov at T-Mobile Arena in Las Vegas in UFC 229. Khabib after his submission win jumped through the cage and launching himself into the crowd. His intended target was Dillon Danis.

However, immediately after that massive brawl which led to the arrest of three of Khabib’s teammates, Dillon Danis was reportedly out enjoying Las Vegas’ nightlife shortly thereafter. This according to top UFC featherweight contender Brian Ortega.

“He came up to me and he was like ‘hey man.’ At first, I was like damn, what are you doing here — especially alone. I was like this guy’s a savage right now. He had a hood on, trying to be low key, but he came up to me, he was respectful, he was like ‘hey man, you’re holding it down for the jiu-jitsu community, you’re doing your thing, I admire you, I appreciate it.’ He was cool about the whole situation. He wouldn’t really tell me much [about the brawl]. He was like, ‘yeah man, shit got crazy. These guys started throwing, I started throwing.’ One of his eyes was swollen. He was just telling me he got a concussion, so he got down to man. After that, he was going to walk out by himself, and I told my boy, I go ‘make sure this guy gets out of here alright,’ cause, you know, there seemed to be some Russians in that club. So I was like ‘make sure this guy gets out safely.’ Cause the last thing you want is this guy getting jumped going out.”

Previous articleStipe unhappy with DC vs Lewis at UFC 230 – goes in hard on the champ!
Next articleSad news for MMA fans. Nate Diaz isn’t fighting at UFC 230